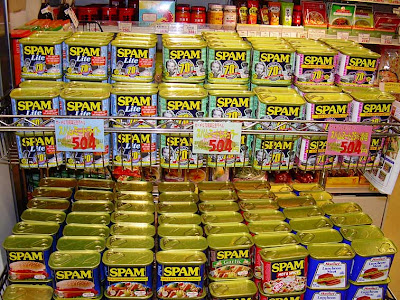 In the U.S., Spam is seen as the lowest of the low among foodstuffs. It's seen as being eaten by people who lack sophistication or have damaged tongues or palates. In Japan, Spam does not carry the same stigma of being low-rent fare. In fact, it's actually pretty expensive (about $5 a can), and while the Japanese don't eat it regularly, I've yet to meet someone who doesn't like it. Every Japanese acquaintance who has gone to Hawaii that I've met has made an effort to eat Spam Musubi (and liked it).

Though I don't even like Spam, I'll miss the completely different attitude that I encounter in Japan about this much derided food product .
Posted by Orchid64 at 12:01 AM