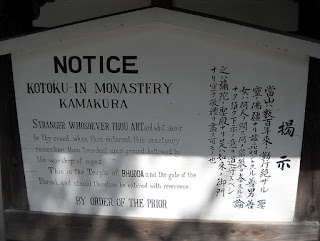 Click this image to see a larger, more readable one. This is their nice way of saying, "don't be an ass when you come here."

Many foreign folks believe that Japanese people don't complain. While it's true that Japanese people don't like to complain, and often don't mention trivial annoyances, they do complain; they simply don't tend to do it in an overt or "in your face" manner. If you're not paying attention, you can miss it or write it off as some sort of quirky communication problem. For example, my new neighbors have been very noisy for the past two months and my husband and I have, reluctantly, had to complain about their stomping and banging around at all hours of the day and night. Rather than go to my neighbors and say, 'the downstairs people have complained and you're too noisy, so settle down,' the landlord issued a gentle note saying, "please be mindful of your neighbors when moving around your apartment." The tone isn't accusatory ("you're noisy"), but a suggestion to be considerate of other people (without revealing exactly who may have a problem).

This type of subtle complaining is designed to keep the relationships between people cordial as well as to allow people to feel they are in control rather than being controlled (which respects their dignity and autonomy), and I'll miss it.
Posted by Orchid64 at 8:00 AM