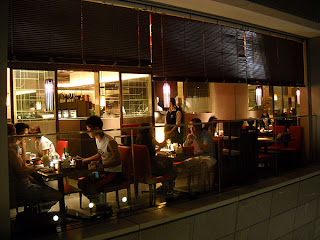 A Roppongi Hills restaurant the summer of 2011, with the doors wide open to the outside and air conditioners blasting.

The summer after the Great Tohoku Earthquake, the number of people who were carted off to the hospital for heat stroke tripled. This was because the damage to the Fukushima power plant created an energy shortage and everyone was encouraged to reduce energy consumption by using their air conditioners at 28 degrees C. (82 degrees F.). Many Japanese people responded by not using their AC at home all in a spirit of solidarity. However, while average consumers were succumbing to the effects of the heat, businesses were doing what they have always done: leaving their doors wide open and allowing the cool air to blast out into the great outdoors. This act of energy wastage is done to make the business appear more inviting to consumers and despite Kyoto accords and pledges to reduce carbon footprints and the very real need to reduce energy after the earthquake, it hasn't changed.

I won't miss seeing doors of heavily air conditioned buildings wide open and bleeding cool air into the open in an act of stupid and pointless energy wasting.
Posted by Orchid64 at 8:00 AM