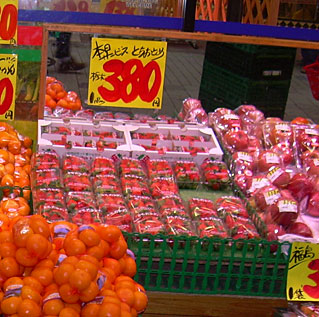 When I was a child, I used to go strawberry picking with my grandmother. The purpose of this was to make a little extra cash because we were paid 25 cents a pint to pick them. It was hot, back-breaking work, but we did it for several summers because it was one of the few ways for a kid under 15 to make a little money. In Japan, my students told me that they sometimes went to farms to pick cherries, strawberries, etc. I asked them why they did this when they had jobs and they said because they were allowed to eat as much as they wanted when they did this. They generally paid between 2000-3000 yen ($25-$37) for the opportunity to do no more than pick their own fruit and consume it on site. They were not allowed to take any fruit home, but essentially were engaged in an all-you-can-eat single fruit buffet for a price that far exceeded buying that same amount of fruit at a fruit stand.

In the U.S., people sometimes pick their own fruit to get a reduced price on what they take home or to ensure that they have the freshest fruit, but they'd never pay a lot more to just stand around in a grove and eat fruit. It always amused me when students told me they paid someone else to have a chance to do what I was once paid to do.
Posted by Orchid64 at 8:00 AM