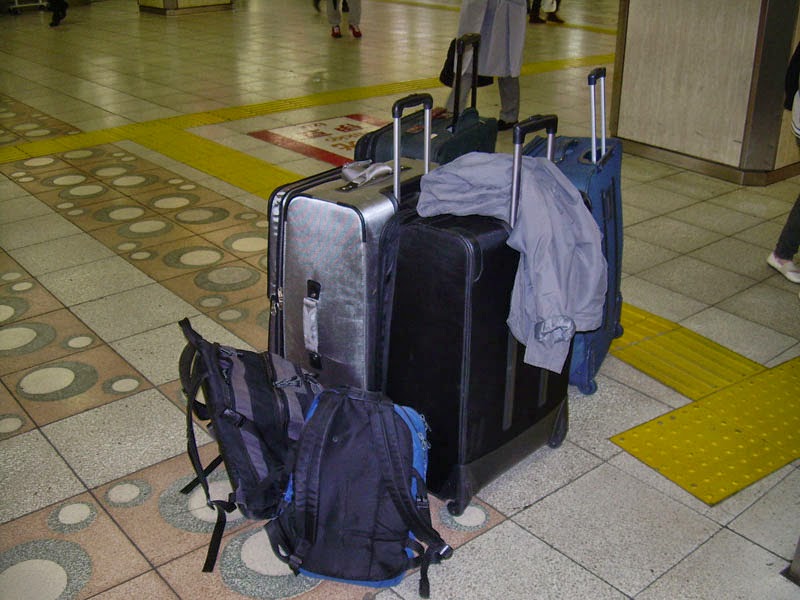 OK, I lied. It was four suitcases and two backpacks (and my husband's jacket).

Time is a far more complex and odd business than we generally give it credit for. It can appear to move fast or slow. We have sayings which indicate that time moves rapidly when we're enjoying ourselves ("time flies when you're having fun") or glacially when we're waiting for something to happen ("a watched pot never boils"), but time is supposed to be a static thing which can be objectively measured.

Time can also appear to match our conception of self or be vastly divergent. There's a scene in the television series "Roseanne" in which the title character asked her mother how old she "feels" on her 62nd birthday. Her mother says, "62, I'm 62." This frustrates Roseanne because, inside, she feels 16 despite her middle-aged exterior. Sometimes we feel younger or older than we look. Though most tend to go the Roseanne route - feeling like a teenager in an old person's body - I have always felt like an elderly person in a young body. When I was 17, I felt like I was 70. If I thought I could know what it was like to feel over a 100 years old, that'd be where I am now at 49.

Of course, if you get into some theoretical Physics, they'll tell you that time can't be proven to exist at all. This has actually been my stance for many years. I think time is an illusion through which we experience this particular reality. That being said, even if it is simply some sort of imaginary prism through which we experience life, we cannot escape looking through it every moment of our lives on earth nor living through that reflection.

As of March 29, my two-year anniversary of returning to the United States passed by. I mention the experience of time because it has absolutely flown by and I feel like I have aged a decade in a short time. My time here has been filled with adjustments of all sorts, many of them logistical and experiential, but the hardest ones have been psychological. I would not be exaggerating if I said that being here has not made me happy. Despite this, I have never wavered from my firm conclusion that this was the right choice.

The truth was that I "knew" in 2009 that it was time to leave Japan. Everything between 2009 and 2012 was preparation in every conceivable way to go. Emotionally preparing myself to leave over a three-year time span was probably the best possible choice after having been there for 20 years (as of 2009). Logistically speaking, spending three years paring back possessions and changing our lives to be one oriented toward leaving rather than staying was just barely enough. It wasn't because we had so many possessions (though we did - but less than many people have), but just that it was so hard to divest ourselves of what we'd spent so long building.

It wasn't just "moving". It was dismantling our entire married life and much of our adult existence. Few people can really embrace what it feels like to intentionally throw away nearly everything you've owned. We took back four large suitcases. Everything else had to find a new home or be tossed out. We didn't ship back anything. That's a lot of memories to toss on the scrap heap. Most people leave some boxes at their parents' houses when they move on or take it all with them if they're old enough to have consolidated everything they've owned. We didn't have that luxury. If you sit down and truly imagine what it is like to throw away everything you own but what can be crammed into two suitcases (two per person in our case), then you can begin to understand how Herculean a task this might be.

The last two weeks in Japan were a whirlwind of getting things done after quitting our jobs layered with trying to squeeze in a few more journeys to places we'd never been but wanted to go, or places we'd been to and wanted to see once more. It was also full of incredibly difficult goodbyes. In fact, that last few weeks was so awful that it has taken me this long to write about it. It did not go as I'd hoped in many ways and was better than expected in others. Before it fades too deeply into the recesses of my memory, I'd like to write about it over several posts. Since it was one of the hardest experiences I've ever had, it's one that I want to remember.

I will start by saying that I had told my students that I was leaving Japan in March 2012 over a span of about a week in January 2012. Though we had planned this departure in the late spring of 2009, the truth was that there was a fallback plan in place all along and various life issues made the delay in telling necessary. We were committed enough to get things in order, but not committed enough to do anything that would irreversibly rupture our lives should we for some reason change our minds.

One of those things was not telling students until it was very late in the game because telling them earlier may have seen some of them deciding to abandon us as teachers. Though it would have been kinder to give them an enormous lead time, it would have been incredibly stupid economically, and a little premature considering we weren't at the point of no return until we actually purchased tickets to leave Japan.

The biggest factor in our decision not to tell them until January 2012 was my surgery for removal of a thyroid tumor shortly before Christmas of 2011. The fact that I even might have a tumor wasn't known until September 2011 and wasn't confirmed until November of the same year. Despite some encouraging pre-operation tests, I was told that they could not be certain that it was not cancerous until after they'd actually removed it and could do a little puree of thyroid gland.

Early tests indicated that it was benign, but there was no way to know for sure until after they'd done their slice and dice. If the tumor had been malignant, there was a very  high chance that we'd have to remain in Tokyo and I'd have to receive treatment for cancer. If that had happened, our planned departure schedule could not be kept. Indeed, we may have had to remain for much longer than expected depending on the prognosis. With no health insurance in the U.S., I could not go back home and get treated without going into deep debt.

The stress of leaving was greatly compounded by this uncertainty, not to mention the reality of having my neck cut open and bits of my original equipment excised. It was as if we'd been planning our ball game for three years and now someone was saying there just might be an enormous storm on the horizon which would indefinitely wash everything out. Telling my students that I would be returning to America in light of this 11th hour complication did not seem like a good idea from either side, so I told them only after the coast was clear.

Fortunately, for more reasons than one, we got to keep our date with destiny. I told my students we were leaving after I was told with certainty and finality that the tumor was benign. That was the green light from fate letting us know that we were good to go. It was confirmation of what I so strongly felt in my gut in 2009. It was "time" to leave. We were ready to move on, but not without some unforgettable final weeks.