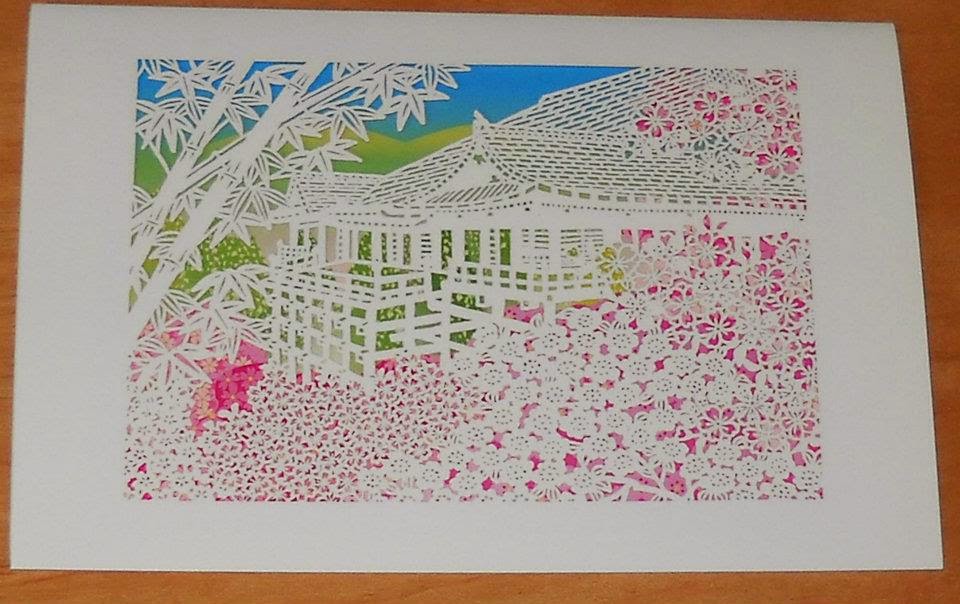 The beautiful laser-cut card that the two sisters gave me.

Here is part 1 and part 2 of this series.

When you have met as many people as my husband and I met during our time in Japan, there are a lot of goodbyes to offer. Our last few weeks were full of trying to balance preparation to leave with meeting people and saying goodbye to them. Some of them would see the last of us in classrooms or in my apartment for a final lesson. Others were actually going to go out to dinner or lunch with us and finally meet the "real" us.

One of the sometimes trying aspects of life in Japan for my husband and I was that we never really felt that we could "be ourselves". There was always the gaijin mask that we had to put on in which we accommodated the passivity of the Japanese, the need to be gentle, quiet, patient, and always being responsible for the conversation and comfort of the other person. Even in social situations, we were always the ones who had to hold back as our natural assertiveness could so easily overwhelm our Japanese friends and acquaintances. We weren't exactly "pod" versions of ourselves, but we often felt like the hosts of any exchange even when we were actually the guests.

During those final weeks and outside of situations in which we were teachers, we allowed some of that to slip away. I had two students who I truly loved teaching and treasured knowing. I taught the older sister for awhile and then her younger sister came on board. Both of them were intelligent, educated, sophisticated, well-traveled, and more Westernized in their demeanor than average.

The older sister was actually born in Tennessee and could have chosen to be a U.S. citizen or a Japanese one. Unfortunately for her, she didn't have the option to be both since this is not allowed between her home country and mine. She was only in the U.S. as an infant, and left by age one, and chose quite reasonably to become a Japanese citizen at the age of 19. I've always felt that it was unfortunate that dual citizenship was not possible, but I'm pretty sure that this choice is made on the Japan side since American permits dual citizenship with many countries and, as far as I know, Japan allows it with none. So, my student who is not fluent in English and belongs to a family of Japanese people chose Japan.

The older sister told me that she got into trouble on more than one occasion because of her propensity for being blunt. I'm pretty sure that she didn't pick this habit up from being born in the U.S., but it is a very American personality trait. She told me that she could "scare" men in particular with her habit of speaking her mind and that she really needed to tone it down. She once made a grown man cry, though sometimes that is like shooting fish in a barrel - especially in Japan where men aren't accustomed to being challenged in general and especially not by women. The truth is that she reminded me of myself when I was younger in this way. I frightened all but the strongest of men away and I married the one who was never intimidated by me. She and I had a lot in common in terms of our "rough edges". A lot of mine had been filed away, but this made me like her all the more. 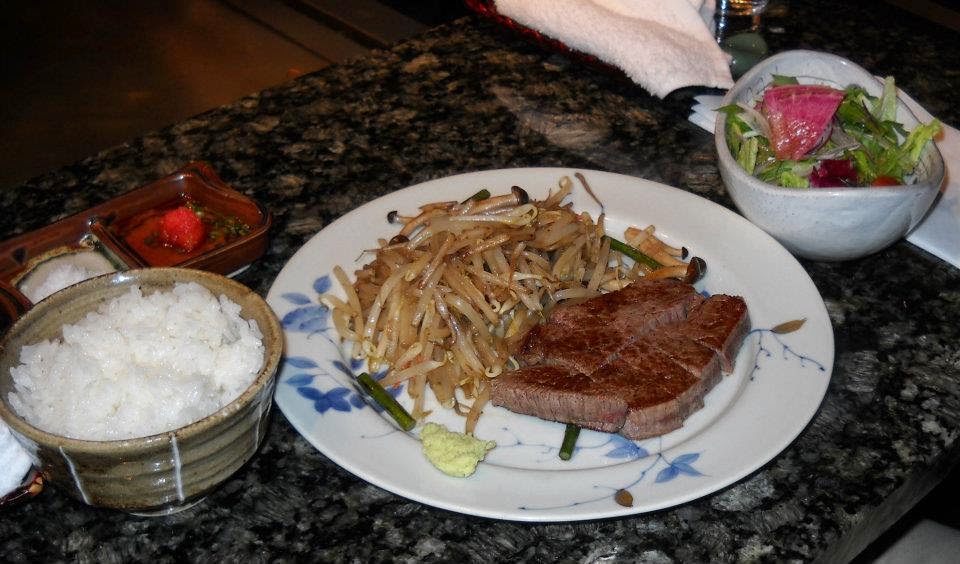 Teppanyaki - manly food for manly men who eat slabs of cow. If he touches the bean sprouts though, he's a big fake!

Since I liked these sisters so much, I was delighted when they suggested that we all go to a goodbye meal. My husband and I had been to a teppanyaki restaurant in Takadanobaba which we really enjoyed the first time around and suggested we do our goodbye meal there with the sisters. As the end came, we found we felt more and more melancholy about all of the places that we'd enjoyed going to, but knew we wouldn't be able to go to again. The place is called Daitokai Honkan and their web site says they are located in Meijiro, but we accessed them via Takadanobaba station.

We were to meet the sisters at around noon, but they were both late and my husband and I were avoiding cell phones up until the bitter end so there was no way for us to contact them. The younger one was less late than the older one, who arrived tottering a bit on high-heeled shoes about fifteen minutes past the appointed time. I did mention that they weren't typical Japanese, and this type of lateness was just one of the smaller indications of this point. 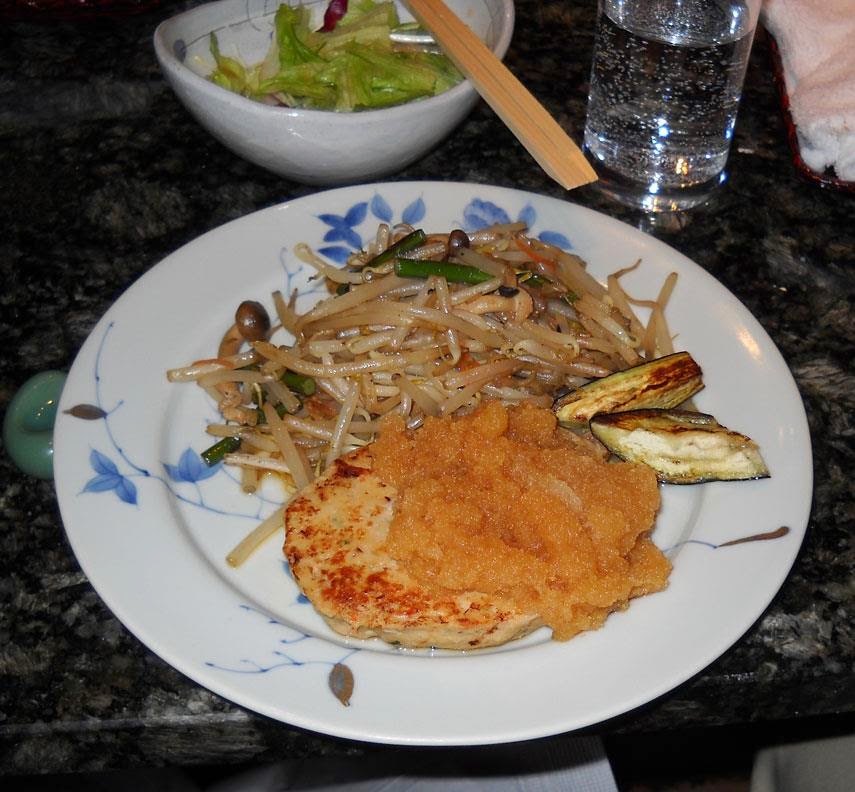 Tofu chicken burger... which felt a little unclear on the concept of vegetarian food, but I'm sure that was not what it was all about.

The main point of teppanyaki is grilling meat in front of the customer, but I am not a fan of steak or any of the other popular types of meat so I ordered a "tofu chicken burger". The concept seemed a bit strange as the point of tofu in the eyes of Western folks is to avoid the shedding of animal blood in the interest of satisfying human appetites. There was minced beet with soy sauce on top and a big side of bean sprouts. This entire meal would have been an experience in total gustatory virtue if it weren't for the fact that a big bowl of white rice came on the side, as is required by Japanese law, I'm sure. I really enjoyed it though, and would have had it again had I not been planning to leave the country pretty much forever in a few weeks.

A lot of the time was spent talking about our plans for the future. The older sister remarked during the end of our two hours there that she realized that she didn't really know the "real" me and that the "teacher" me was not truly me. I felt that this was particularly astute on her part as I'm sure few of our students realized this fact, though I guess even fewer got to spend two hours with me talking and not worrying about their impressions of me. 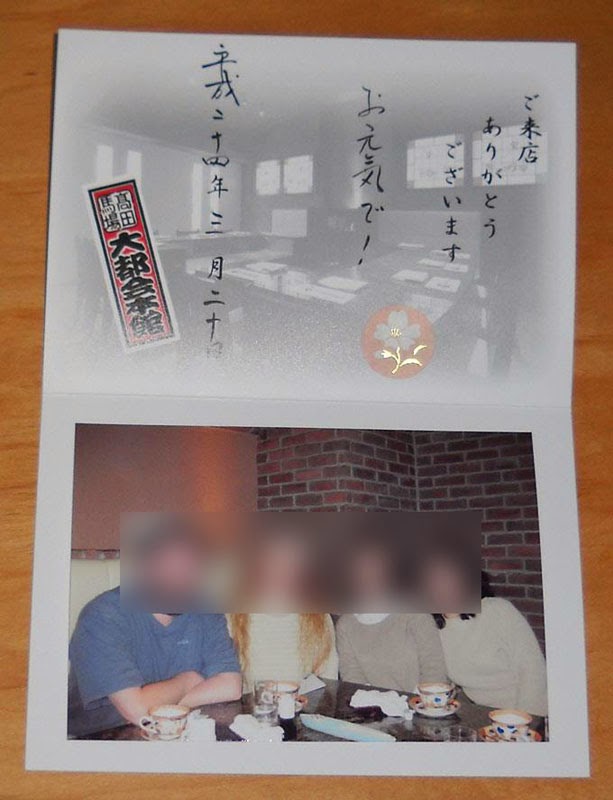 You can conclude that we are all wanted by the law for some reason (in Japan, it could be for not eating all of the rice they served) or that I'm trying to protect everyone's privacy.

Near the end of the meal, as we were enjoying coffee and tea in beautiful china cups, the people in the restaurant offered to take our photo. I wondered if this was like one of those things that used to happen in the 1960s and 70s when they'd take your picture and then make you pay for a copy of it, but they said that it was a free service and provided us with a card and the photo. The people at the restaurant were incredibly nice and professional. This wasn't even an especially expensive place, but the service was excellent.

After sitting with these two lovely women and having the sort of conversation that you have when you're not a teacher and responsible for helping someone advance their language skills, I thought about how an opportunity had been missed. Since we were leaving, it was also one that would never come again. Of course, you cannot know how such goodbyes will go or what people will do until you try, and this was the best of all of the farewell social occasions that we had. Some of others were far more difficult and complex. (to be continued)
Posted by Orchid64 at 8:00 AM