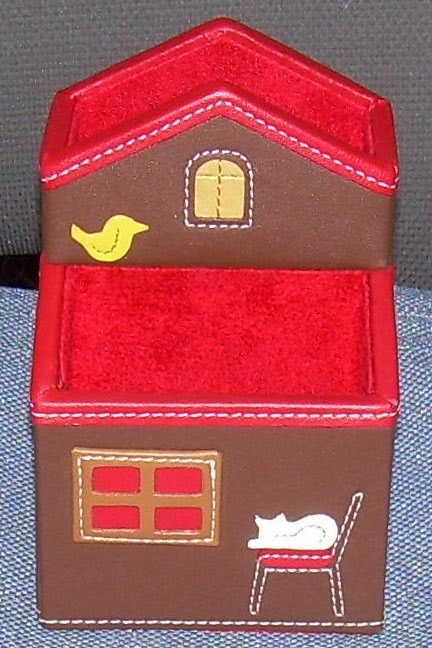 H.'s goodbye gift to the husband and me - she chose this because she wanted to give us something to remind us of her house, which is two stories tall, but is not red and brown nor did it have a cat or bird.

When it came to saying goodbyes, my husband and I had to find a balance between his students/friends and mine. We couldn't possibly fit in goodbye get-togethers with everyone, much as we might have liked to have done so. The truth is that we both had to suffer a bit of guilt turning down invitations to go out with people who wanted to spend some time at a restaurant or an izakaya (Japanese pub) with us. We didn't fool ourselves into thinking we were so insanely charming and appealing that people were clamoring to spend social time with us. I think some invitations were as much about a sense that they should be proffered as anything else. Some were, of course, very sincere.

I think most of the people who invited us knew that it was impossible to see everyone and we did have a goodbye party scheduled for our mutual workplace at which many of the students my husband had taught for many years would be able to take part. Since I had worked there for less than a year, it wasn't as sentimental for me, but I was still pleased to be able to go there and feel I belonged since I worked there as well. I will talk about that job and the goodbye party at a later time, but I really did like being there and it made it that much harder to leave Japan.

The one and only invitation from one of my husband's students that we accepted was from a woman who I will call "H." H. was a music teacher who tutored people in her homes and my husband functioned more as her default counselor than a simple English instructor. She was one of those all too common Japanese mothers who formed a stronger bond with her son than with her husband. When the son got a girlfriend, she wrung her hands, gnashed her teeth, and tried to tighten the apron strings. When her son finally decided to get engaged and move into his own place with his girlfriend, he told everyone but his mother. He didn't want to deal with the hysterics so he just vanished and she was told after the deed was done.

H. was a nice lady and she wanted things to go well for her kids, but her own emotional needs, at least at times, overrode their desire for autonomy. This is certainly not uncommon among parents. This selfishness tends to be present as much among Western parents as Japanese ones. It just tends to manifest differently in the West.

My husband was generally quite sympathetic to H. and, when he told me about her, he spoke positively of her. When she invited us to an evening at her home for dinner, we were both happy to accept. She even picked us up at the local train station in her car and drove us to her place. It was rare for us not to have to wander around finding our own way or to have to figure out bus schedules and routes to get around to areas far from the station.

When we arrived, we chatted with her and her daughter for a bit over Coca-cola Zero (purchased just for us) and snacks. Eventually, her son came home by and her husband came home and they rolled out an enormous dinner for us including an extremely gorgeous roast chicken that had also been prepared especially for my husband. The meal also included something that looked like and resembled guacamole, but was made with hard-boiled eggs and mayonnaise in addition to avocado. It was one of those things which I'd never make, but is right at home on a Japanese dinner table as mayo by the bucket is not the least bit unusual.

After the meal, at which we spent most of the time talking about food and tastes, we had one of the most memorable and beautiful experiences of our time in Japan when H., her daughter, and her son (who were also musicians) performed Pachelbel's Canon in D for us. This was the song that we played at our wedding in lieu of the wedding march - my husband and I walked in together to this music rather than do a more formal or traditional ceremony. I don't know if they chose this music because he had told them that or if it was just a happy coincidence, but I remember thinking that that was the sort of experience that I would almost certainly never have had in the U.S. I was fortunate to have my digital camera with a video recording capability and have it preserved for posterity.

As I sat there listening to them play beautifully, I cried. It was the sort of moment near the end that I wanted to hold onto. It was one perfect experience that I'd link forever with Japan and I was immensely grateful to H. for providing it. Unfortunately, that memory was not to survive without becoming tainted.

To explain that statement, I have to jump ahead to the very last hours of our time in Japan and over several more events/goodbyes. We visited H. about a week before we left and the time between being at her home and going to the airport was hectic and generally pretty terrible. I'd gone through so many emotional and wrenching goodbyes and worked so hard to get everything together that the stress suppressed my immune system such that I got sick. The morning that we left, I was exhausted emotionally and also physically. It was hectic and difficult on many levels, but I will get to that in a later post.

When we finally got to the airport and unloaded our four enormous suitcases, all I wanted to do was relax for a bit and take in the last moments in Japan in a sort of peace that I'd not experienced for quite some time. I wanted to just ease into the end and be alone with my husband as we closed in on the moment when we got onto the plane and flew away.

As our last bit of "work", my husband and I struggled to use his laptop with the airport Wi-Fi and make a Skype call to his father to let him know what was going on since he was going to pick us up on the other end. Once this was done, we wanted to slowly and peacefully stroll around Narita and reflect on what we were leaving behind and what was ahead. It was a private time, a short window to say an internal as well as an external goodbye after some extremely draining weeks. The truth was that I was a shambles in every way possible. I was at the very limit of any other event happening to me which was going to tax me in any way. I needed some time for quiet reflection desperately and for all of the turmoil to just stop for awhile. I needed both emotional processing time and some physical rest.

As we just started out to make a thoughtful trek around Narita, my husband's name was called out by a woman out ahead of us. It was H., waving and shouting with an enormous smile. We did not invite her. In fact, we did not tell her when we would be there or what airline we would be flying on. She only knew the day we were departing and she had done detective work on her own to track us down.

I was stunned that she felt it was appropriate to stalk us to the airport on our departure day and furious that she would show up cheery and excited at a time when she was not in any way welcome. That last thing I wanted to do at that time was put on my happy gaijin mask and entertain this woman who clearly had no clue about what limits and boundaries meant. I could barely manage to be civil as my husband tried to talk to her pleasantly for a bit. After barely a minute of forced chat, I excused myself saying that I was not feeling well at all - which was true, but not the only reason I extricated myself. My husband talked to her a bit longer then escaped as well. He felt that she had absolutely no empathy for what we were going through. Not a thought in her head was directed at what we might have been experiencing or needing at that time.

I was so furious at H.'s behavior that I will forever associate her not with that beautiful final evening, but with that inappropriate and unwelcome insertion into my final hour or so in Japan. She had no idea what she had taken from me at a time when I was least able to give anymore than I already had. The selfishness and concern for only her needs and feelings which she had displayed with her son was now being shown toward us. She only cared about amusing herself by following a couple of gaijin to the airport on their last day. It was all just a lark to her.

My husband mumbled that, if she was going to drive all the way out to the airport, the least she could have done was offer to drive us and our suitcases there to spare us the hassle and expense. However, that would have assumed that she was thinking about our feelings and not her own. It was a bitter experience that left a dark mark on my farewell to Japan. Japanese people can be just as self-involved as Westerners - this I already knew - but this was a time when I least expected it and when it cost me the most personally. (to be continued)