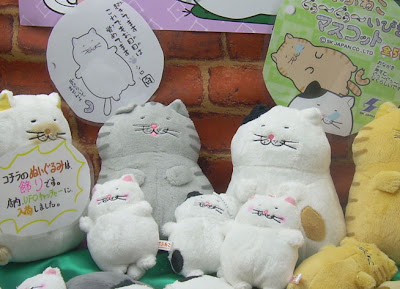 I have to confess that I am not entirely immune to the "kawaii" (cute) aspects of Japanese pop culture. My head is duly hung in shame at being in my mid 40's and still being lured by the occasional cute thing. One of those things is the SK Japan mascot (called "debuneko"／でぶねこ or "fatty cat") which is sometimes marketed as a "metabo" cat. "Metabo" is the Japanese-English term for "metabolic syndrome". It essentially refers to middle-aged spread and has become a ubiquitous term as of late so it is applied to this big, fat kitty. As a long-time fan of Kliban cats, and as someone who eventually (when I go home) wants to get herself a big, fat real cat, I love this mascot. Every time I see it, the 8-year-old girl in me says, "squee!" I want one, but I only see them in UFO Catcher (claw) games and I can't play them.

I'll miss seeing the SK Japan cat mascot and its glorious fat cuteness.
Posted by Orchid64 at 12:15 AM