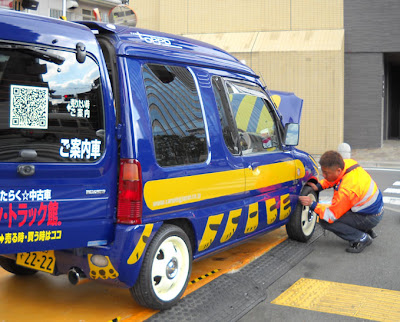 I know that many men all over the world treat their cars with the same or better regard than their genitalia, and that they can get a bit nutty if someone dings or touches their cars. In Japan though, that level of investment seems to be turned up to "11". I have witnessed and heard about a lot of cases where Japanese men went absolutely bonkers over the slightest touch of their vehicle by a passing bicycle, a pedestrian, or other vehicle. No damage even has to be done for them to go ballistic. They just have to perceive that the potential for damage could have been done. If you happen to hit a spot which was previously blemished, you're going to be blamed even if that scratch is rusty and clearly old. The Japanese are just far nuttier about perfection in their cars than almost any other country's people, and this obsession is reflected in these reactions. In most cases, you'd get far more passion for imperceptibly scratching a guy's car door than for insulting his wife's appearance.

I won't miss the psychotic way some Japanese men react at the mere hint of a ding on their vehicles.
Posted by Orchid64 at 12:15 AM