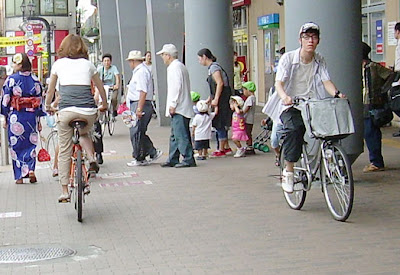 Somewhere in the cobwebbed areas of my deeper memory, I recall seeing a comedic scene in a movie or T.V. show where a person is riding a bike and is so distracted by an attractive women, that he doesn't look where he is going and crashes into something. Seems rather silly, eh? Well, there is a situation in Japan that happens to me which makes it seem much more plausible. When I'm riding my bike, other bike riders coming in the opposite direction (when not busy talking or texting and staring at their cell phones) suddenly become stunned into a stupor at the sight of a foreigner. They gawk, and their bike starts to glide toward me. This is when I either have to defensively drive or ring my bell and adopt an angry look to get them to put their eyes back on the damn street. Two people in the last 3 months have actually crashed while gawking at me (I kid you not - one was an old man and the other a little girl).

I won't miss being nearly run into by idiots who seem stunned into paralysis at the sight of a "gaijin." (foreigner)
Posted by Orchid64 at 12:15 AM