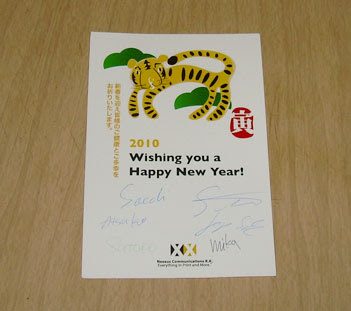 Every year, my students, foreign and Japanese acquaintances, and blog buddies complain about having to write New Year's postcards... well, "write" isn't really correct. Most of them just print a sheaf of them en masse from their color printers. I have never met one person who likes sending them out, and few who care much about even receiving them. It's a tradition which is even worse than sending Christmas cards because the messages are shorter and hollower than the boring, mass produced yearly holiday letters that people cram in them. They're really just something people do out of obligation or for business purposes. The tradition seems to exist mainly so that people can get the equivalent of an entry into the postal lottery which comes along with certain types of cards and stamps. Most people don't win anything (or at best, win some stamps), but it is pretty much the only reason they care about getting the cards since the messages are so brief and perfunctory.

I won't miss getting these cards knowing that they're sent out of obligation and I won't miss feeling guilty that I don't send any myself in return out of similar obligation.
Posted by Orchid64 at 12:15 AM