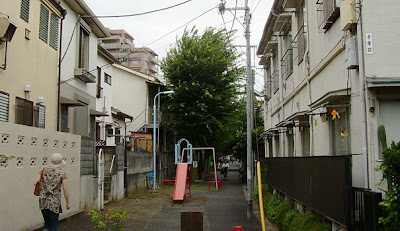 A tree top bends in the wind and the sky has darkened as a typhoon approaches.
I'm a big fan of dramatic weather. I love the sound of thunder and hard rain, and the charged feeling in the air before they come. There's something invigorating to me about nature proving who is boss as it bends tree tops, knocks over rows of bikes, and spits all over the windows. To that end, I like the atmosphere and reactions that surround typhoons in Tokyo. They are never that serious and people rarely get hurt in the city, but there seems to be a very urgent response from people nonetheless. At my former office, Japanese employees, particularly women, were sent home early on days when a typhoon was approaching (foreigners had to stay) as if they might be blown away in the wind if they didn't reach the safety of home first. People would tell you to be careful as if you might lose life and limb even though the worst that could generally happen was that you'd get really, really wet. One of my earliest experiences at my job was going to a "goodbye lunch" for a coworker in the middle of a raging typhoon that passed by a hinged metal sculpture that whipped around scarily in the wind.

I'll miss typhoons in Tokyo, and all of the human replies to their approach.
Posted by Orchid64 at 12:15 AM