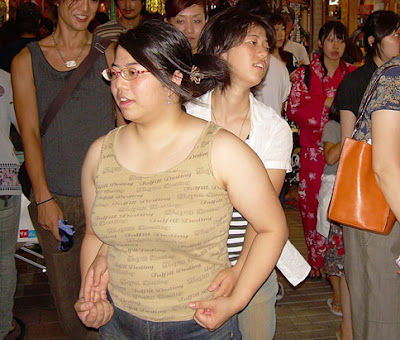 One of the things which continues to catch my eye in Japan is the way in which adult women will hold each others hands in public. It gets my attention for a few reasons. First of all, physical displays of affection are relatively uncommon in public, even between children and parents, let alone other adults. Second, back home adult women do not hold each others hands because of the fear that it might make them look like lesbians. In the U.S. we are usually hyper-aware of how touching between women might be interpreted in most cases and won't touch other women with affection (but we will hold a man's hand). In Japan, clearly physical affection between women is viewed less with a romantic lens and more with a friendship one.

I like the way in which women in Japan will hold their friends or family members hands in a way which shows they're not self-conscious of it as well as the affection it seems to show, and I'll miss that.
Posted by Orchid64 at 12:15 AM