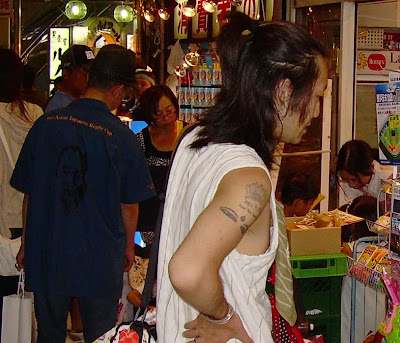 Tattoos are nothing new in the world, nor are they new to Japan. Every exhibitionist and her brother in the west has sanskrit, Chinese characters, or "Hello Kitty" tattooed on their arms. It carries no (or very little) taboo, and rarely will get you denied access to anything. In Japan, tattoos are actually a real act of rebellion because they are associated with organized crime and people of poor repute. Visible tattoos can get you barred from certain services such as onsen or public baths. You will also be denied jobs if you have tattoos. Even if you can hide them, many people have to live in fear that some activity (like a company outing or trip) will require them to show their bodies in a fashion that will reveal the tattoo. Average folks do not get tattoos, and it is certainly not an easy or casual choice for someone to ink up their body in Japan.

I'll miss seeing tattoos and knowing that these are people who have made a conscious decision to situate themselves outside of what is acceptable in Japanese culture.
Posted by Orchid64 at 12:15 AM