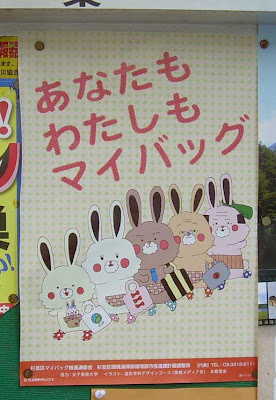 A sign encouraging everyone to carry their own bag rather than use plastic ones - note how they all follow each other, and look, and act the same.
There was a big flap several years ago about Brazilians living in a particular apartment building and their inability to get along with their Japanese neighbors. They weren't unfriendly. They didn't do anything criminal or fail to follow some rules. The thing they did was talk too loudly for the delicate ears of their Japanese neighbors.* The Japanese expected the Brazilians to totally abandon their Brazilian character and assimilate according to some arbitrary definition of "Japanese character". This attitude is not only an issue with the Japanese, but also among foreigners who are deep in the thrall of their infatuation with Japanese culture. It's not enough to follow the rules, pay your taxes, and abide the law. You must become one with the Japanese. Coming from the Japanese, this can certainly be understood since they bash down nails in their own ethnic group when they stick out (though it is a destructive thing even among the Japanese and results in social isolation and suicide). Coming from some foreigners, who presumably have experience with ethnic diversity and tolerance, it is quite absurd to advocate foreign folks try and make themselves into character clones of the natives.

I won't miss this expectation and tendency to push total cultural assimilation and the complete abandoning of one's native character and values.

*Note: Japanese neighbors are far from quiet and are just as capable of speaking at bombastic volume as anyone else. Trust me, I have plenty of experience in this area. Double standards are applied to foreigners in regards to noise and neighborly behavior.
Posted by Orchid64 at 12:15 AM