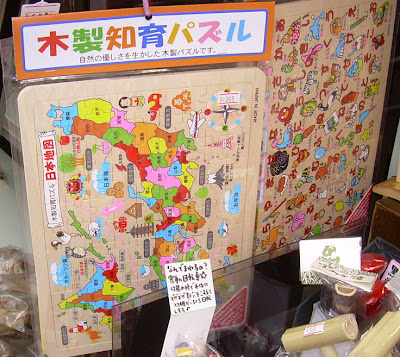 Since I grew up a little less than a half century ago and the world has really moved on since I was a young pup, I rarely see things which bring on a sense of nostalgia for my youth. It's not merely that I'm in Japan, but also that the "stuff" I played with isn't around anymore. Occasionally, I'll run across something both reminds me of my childhood, but also is a reoriented memory that makes it a "Japan-only" experience. For instance, I grew up with wooden maps of the United States that were meant to teach me the position, names, and capitals of every state. When I saw a similar map for Japan, I had this odd sense of nostalgia that was suddenly skewed.

I'll miss the unique experience of seeing these types of things which both are and are not a part of my deepest memories at the same time.
Posted by Orchid64 at 12:15 AM