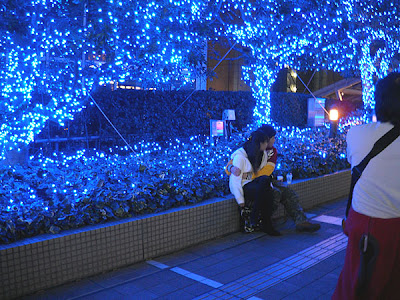 Illumination, or lights, pop up all over Japan as the Christmas season approaches. There are some particularly spectacular ones in various areas of Japan which eclipse the one in Shinjuku for sheer breathtaking scope and beauty. The Kobe Luminarie is just one of them. However, it's not all about spectacle or beauty. It's also about atmosphere. The Shinjuku illumination has a special charm because it has turned into a place for lovers to stroll and display their affection publicly in a manner and concentration which is rare for Japan. It is a lover's walk and a cuddle-fest at certain times of day, especially when cooler temperatures encourage holding one another close. Christmas is often viewed as a romantic holiday in Japan anyway, and the area around where the Shinjuku illumination displays this aspect well. It also doesn't hurt that it's a lot closer to my home than any of the big ticket illuminations that are very far afield.

I like seeing real romance in public in a country which frowns on its open display, and I'll miss the atmosphere and blue lights of the Shinjuku Illumination.
Posted by Orchid64 at 12:15 AM