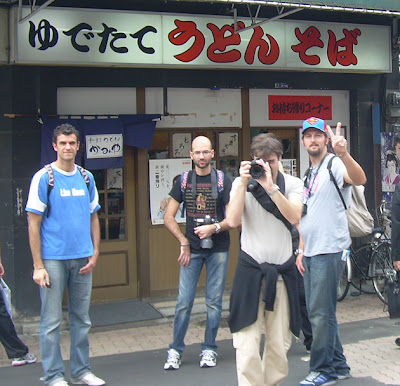 Compare the height of these guys to the door behind them. You get an idea of the general height, though this isn't the best picture to illustrate my point.
I learned recently that my husband and I are each of absolutely average height for Americans at 5' 9" (175 cm.) and 5' 4" (162.5 cm) respectively. That means we are neither rather tall nor short. The ceilings in Japan aren't a problem for us when it comes to bumping our heads, though they can be so for taller Western folks. However, they are low enough to cause other problems even for those of average height. In particular, the lighting fixtures end up hanging down so low that one move with your arms can send them swinging madly. Since the fixtures are in the middle of small rooms with little free space, my husband in particular finds himself whacking the paper lantern or the strings hanging from smoke alarms from the mere act of moving his arms to put on a shirt. I often snag such things while messing with the vacuum cleaner hose, especially if I'm doing the required "vacuum the walls" business in Tokyo*.

I won't miss the low ceilings and doorways.


*You're supposed to do this because of the air pollution and to keep things cleaner for your air conditioner; I was once chastised by an AC repairman for not vacuuming my walls enough.
Posted by Orchid64 at 12:15 AM