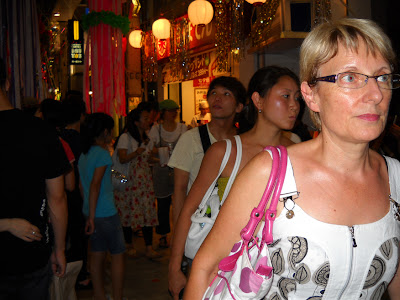 I don't know if this lovely lady is an expat, but she probably is a foreigner (probably).
Many Japanese believe that a foreigner is a foreigner is a foreigner, particularly if they are of the Caucasian variety, and they think we all make a lot of money and have an easier life than they do. I believe that this idea is fueled by the existence of expatriates. Expats are the "trust fund" babies eating from silver spoons of the gaijin (foreigner) world. These are people who do not live the same life as Japanese people or the gaijin grunts. They are sent over here by their companies and tend to have their path smoothly paved. They don't have to deal with much in the way of bureaucracy, and often have translators or help when there's a bump in the road of Japanese life. They live in places that are much larger than the rest of ours (yet they feel are "tiny"), and their astronomical rents are paid by their companies. They live like long-term tourists dabbling in language and cultural pursuits. All of this isn't a problem except that they're also a bit snobbish and tend to prefer to keep amongst "their own kind". They look down on us gaijin rabble who secure our own jobs, negotiate our own rent contracts, and deal with shopping in Japanese markets (rather than the overpriced import shops in the tony "gaijin ghetto" areas), and even when they have a chance to associate with us, they often prefer to make friends with other expats.

I won't miss the classist attitude of some expats and their ignorant notions of life in Japan based on living in a cloistered and specialized environment.
Posted by Orchid64 at 12:15 AM