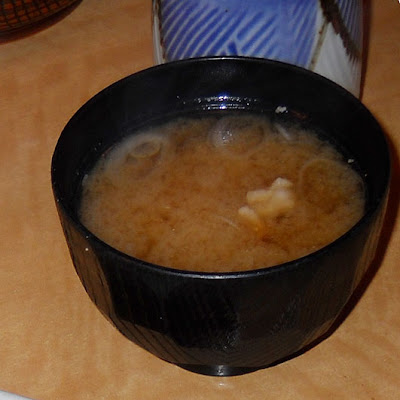 People talk a lot about authenticity and food, and I generally think it's a bunch of snobbery put forth by people who need to elevate themselves (via their tastes in food) above others about a trivial point. However, after years of eating Japanized American food and some experience eating Americanized Japanese food, I have no choice but to change my thinking in this regard. The origin and handling of the materials has a profound effect on the outcome, and having a bowl of miso soup at a Japanese restaurant in Tokyo is not the same as having one at a Japanese restaurant in San Francisco. Even when people who know what they are doing are manning the kitchen, it still tastes better here, and I'm guessing that has to do with the authentic materials.

I love the salty, savory goodness and the belly-warming and filling qualities of miso soup I'll miss it, as it can only be had in Japan.
Posted by Orchid64 at 12:15 AM