Will Miss #310 - the golden turd building 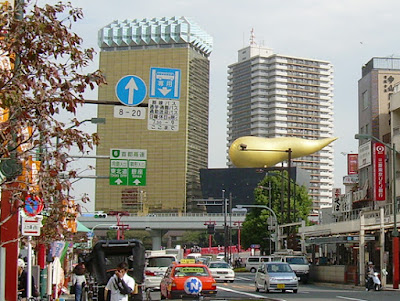 In Asakusa, there is a famous building which foreign folks often refer to as "the golden turd" building. It was designed by a famous French designer (Philippe Starck) and is occupied by Asahi Breweries. The building itself is less of interest than the fact that the people at Asahi at some point were shown a design, which obviously didn't look anything like a golden flame, and went ahead and built it anyway. And even if they didn't realize it was going to look like gilded poo at the design stage, they surely know now, yet they still leave it right there for everyone who sees it to titter at.

I'll miss the way this building shows that some Japanese companies have the guts to live with an embarrassing mistake created by a famous person than admit to it by tearing it down.
Posted by Orchid64 at 12:15 AM