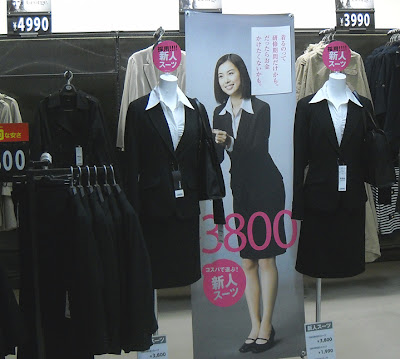 It's probably not fair to call this "the office lady trot", since women everywhere do it, but it is something that I witnessed early and often among office ladies. We all know what people mean when they say "run like a girl", but I've seen it taken to an all new level in Japan. This is a "run" which has all of the appearances of increased movement without any but the most incidental increase in speed. The arms flail, the legs move up and down at a higher rate, but velocity remains little different from that of walking. I once wrote an article about this for Tokyo Journal magazine, and speculated that this grew out of the need in offices to give the illusion that one was rapidly trying to get from point A to point B while not actually speeding up. It shows energy and enthusiasm, while accomplishing nothing of value at all.

I'll miss seeing "the office lady trot", and what it says about style over substance in Japan.
Posted by Orchid64 at 12:15 AM