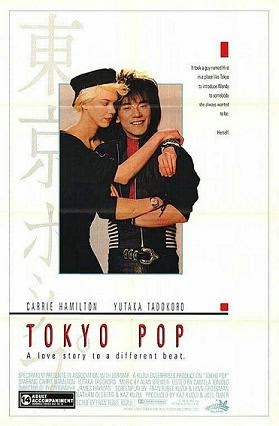 Image pilfered from Wikipedia's page for the movie.

When we think of "growing up", we tend to think of moving through childhood to adulthood. The idea seems to be that, when we reach our full height and the age of adulthood, the "growing" part is finished. I have learned that that is not so. One might think of what I'm speaking of as "maturity", but that is too limiting a phrase for what I mean. I mean that I grew as a human being in immeasurable ways even after reaching my adult height and was legally responsible for my actions in the eyes of society.

The Japan I grew up in was the one that existed from 1988 onward. It is not the Japan that people experience today. In many ways, I feel that my adult "formative years" occurred from 1988 to around 2000. Those were the years of what I consider my relative isolation from my own culture and from Americans. They were before high speed internet began to create consistent access to my friends and American culture. Prior to that, we were exchanging videos by seamail and writing letters. The videos came sometimes a year behind the times, and contained little content relatively speaking. The letters I wrote to people were almost universally unanswered so communication tended to be a one-way street in which I wasn't getting any traffic coming my way.

The world I lived in in Japan is one that I have often tried to make understood via my memories and thoughts in this blog. To some extent, some of which you can "see" it here, but you can "see" and feel it more clearly, at least visually and aurally, via a movie made at that time. That movie, "Tokyo Pop", resonated strongly with both my husband and me when we first saw it. It remains a time capsule of Japan during a certain era and the weeds borne of the seeds of what is shown there still have roots in the culture, even if they have been pruned back so they're less visible.

When I speak of the "roots" and "weeds" here, I speak of the obvious objectification that occurs in the movie. Things are different now, but people still stare. They still value you for your hair, eye, and skin color. They still treat you like a pampered puppy and still forgive you when you pee on the carpet because you're just so precious and dumb. They still help you get by in a world they are certain you can't understand, and they're often right that you don't "get it" when it comes to what it really means to "be Japanese".

At any rate, I have thought about "Tokyo Pop" on and off for several years. I used to have a video copy of it in Japan and lost it or threw it out when the technology became outdated. I wished for several years that I had hung onto it long enough to digitize it, and I looked for a DVD copy on line on several occasions.

Unfortunately, you can only get a VHS copy and I don't want it badly enough to go find a used machine and capture it. Fortunately, there's YouTube, and at the time of this post, the entire movie is available there. My guess is that it will never see a DVD release because of the song rights and the expense of licensing songs like "You Make Me Feel Like a Natural Woman," "Blue Suede Shoes," and "Do You Believe in Magic." These songs are new enough that they'd have to pay to use them and they really can't be cut from the movie as it focuses on people who are aspiring musicians.

I'd like to invite my readers to watch it "with me", or at least take note of a few things which are memory touchstones for me in that movie. If you attend carefully to the things that are going on, you'll see a lot of what I "grew up with" in Tokyo. I'd recommend you follow the link and watch the movie or at least watch along before reading this post. You don't have to, but it'll help this post make a bit more sense.

Some of the scenes have a very strong resonance for me. For example, the main character, Wendy, played by Carrie Hamilton, is walking along the street and passes a monk with a begging bowl. When I worked in Shinjuku, a man who dressed exactly like him used to stand out in front with his bowl. Occasionally, I'd put a 500-yen coin (about $5) into his bowl on my way to work. I did it to support what I felt was his choice of what was certainly a difficult and alternative lifestyle in the culture. Such a monk stopped standing there about a decade ago. I don't know if he got chased off or if it simply was no longer worthwhile to stand there mumbling prayers with a bowl in his hands.

Shortly after Carrie passes the monk, she goes to a bank of green pay phones to make a call. She doesn't know how to use the phones, but a Japanese man inserts his phone card into the machine for her (essentially paying for her call). I used to call my husband when he was at home (as a student and househusband) from that type of bank of phones when I was in my early days at my company and he used to call me from such phones when he was working and I was recovering from both gall bladder surgery and the emotional fall-out of my two hard years of working at Nova conversation school.

The phones throughout the movie remind me so much of my early time in Japan. The pink ones that only take 10-yen coins, the green ones that only take cards, and the red ones which I can't remember much about. The fact that there were so many different phones and each took a different currency seemed strange to me at the time, but I realize now that it was likely a way of adding in new technology slowly as well as catering to the needs of people who didn't happen to have the right coins or cards. It was a form of accomodation for everyone in Japan, despite the loss of profit or the extra effort involved in maintaining older phones. Removing a bunch of 10-yen coins on a regular basis would be a real pain for workers, but those phones lingered for many years despite the extra effort involved.

There are also human ticker punchers shown in the stations (~10:30) in the movie. Their backs are shown, but the days when men stood or sat for hours on end doing nothing more than clipping and punching tickets as people got on the train or collecting stubs as they got off of them are long over. Seeing them in the movie creates a profound sense of nostalgia for me as does the byzantine packed station that Wendy gets lost in. The latter did not change, of course, but the former takes me back to days when you could wicket jump to avoid paying your full fare.

I would also invite those who take the time to watch the movie to note the narrow spaces and clutter in the ryokan (Japanese inn) shown in the film. That is the truth of life in Japan for many people rather than the pristine open spaces that many foreigners imagine. I think Mickey house (the ryokan in the movie) used to be a real place (there's an ancient web site for what seems to be it, but it's hard to say if it was a ryokan or only a conversation lounge), but it is no longer in business if it ever was real.

When you look around inside Mickey House, note the claustrophobic corridors and the horrible kitchen. The water heater that you see above the sink crammed full of dishes is exactly the sort that I had in my apartment until the very end. In fact, it was replaced with a new one not too long before I left so the technology isn't being phased out. While it may be tempting to conclude that only an inn that caters to foreigners would see such chaos and clutter, I saw Japanese homes which had a similar atmosphere and were equally overloaded and disorganized.

While Hiro, the male lead character, is talking to Wendy, she says that she only knows two words in Japanese. One is "arigato" and the other is "benjo". When my husband and I were in Japan in our first year, he wanted to ask a station personnel member where the bathroom was and he used the word "benjo" and they laughed at him and made fun of his word choice. Though the Japanese are often kind and overly complimentary about ones limited Japanese, that is not always the case. The more common word is "toire", but that's not what our language books had told us and my husband was humiliated for his misinformation.

The exchange in front of the ramen stand in which Hiro is clearly saying "sure" to everything Wendy is saying when he doesn't really understand is also one that had a lot of verisimilitude. Rather than embarrass you or themselves by admitting that they don't understand, Japanese people will often just keep nodding and saying, "yes", as if they agree and understand. One of the most common bits of advice that I used to give my students when they had communication with foreigners was to never pretend to understand or say "yes" when they weren't certain about what they agree to.

The big chef's head on top of the building that you see when Wendy and Hiro separate at the love hotel is along a major street in Kappabashi. The place is famous for plastic food, but it's really more of a restaurant supply area. These days, there is less in the way of food modeling and more in the way of stoves, chairs, and dishes. It's still a great area to investigate, but it tends to be an unexplored gem on the part of both domestic and international tourists. I told my students that I went there one weekend, and they were puzzled as to why I would bother. None of them had ever been there, and few seemed to even know it was the plastic food mecca of Tokyo.