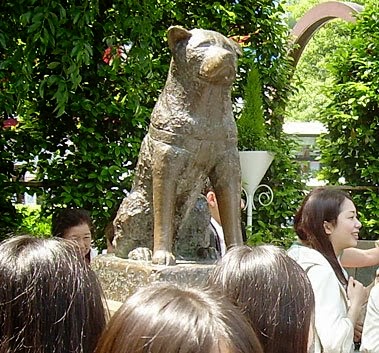 It is only now that I realize that what I really miss is the common cultural touchstone aspect of this dog statue in Shibuya. It was such a rallying point and everyone who has spent even several months in Tokyo will know about it and recognize it when it is shown in movies or pictures. The fact that we all used it as a meeting point despite the enormous crowds of people who were doing the same was also a bit delicious. Since everyone tended to meet anyone who they were meeting in Shibuya there, it was that much harder to pick your friends out in the crowd. Well, it was unless you were a foreigner ("gaijin") meeting a similarly different-looking alien.

I miss the statue of Hachiko as much for the shared sense of it being the place to meet among those who were congregating in Shibuya as the story behind the faithful dog who waiting for his master who had passed away.
Posted by Orchid64 at 8:00 AM