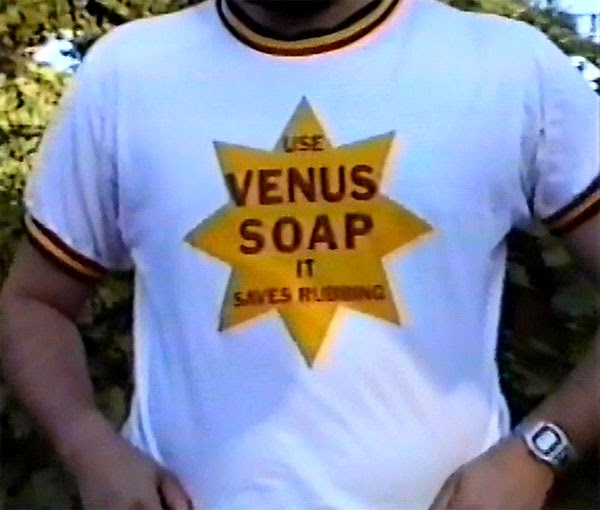 This is part of a sequence of posts that I'll be making from time to time about things that I wish I had kept or at least had taken a picture of. These are memory fragments rather than full-blown stories, but they are things that have stuck with me which I want to take note of before I forget them. Part 1 is here.

Most people who follow anything about Japan know about "Engrish". You know, those funky combinations of words and pseudo-words that you see on signs and, perhaps more famously, on T-shirts. Ah, the T-shirts. The 80's and 90's were the golden age of such things. For reasons I'll probably never understand, they got a lot less funny and a lot harder to find as the years went by. Perhaps there was one lone writer who made it his goal in life to concoct the most surreal, bizarre, and suggestive comments possible. Well, it could have been that or simply someone who random grabbed words and phrases in a freeform mix and match.

I asked students on occasion why so much weird English was emblazoned on shirts in Japan. They always told me the same thing. That was that the words did not matter. The look of the English letters was the thing. It's the same thing in Western countries in which weird Chinese character combinations are used on shirts and tattoos. Just as Asian folks who can read those character snicker at our obliviousness, we snickered at the funky English.

Since it became more difficult to find funny English shirts and the number of those shirts in general seemed to go down, I really regret that I didn't hang on to or take better care of some of the best ones. The slogans on them stick with my husband and I to this day. Two of our favorites were a shirt that said, "Slurp, is that your foot" and another which said a ton of text which I recall and finished with "beat his monkey ass 'til it ain't no fun." When my husband and I are joking around and I pretend to be annoyed with him, I still say, "I'm going to beat your monkey ass until it ain't no fun... and that's going to be a very long time."

The shirt pictured at the top of this post comes from a "found" video. I was shocked when I came back to the U.S. and raided my in-laws video archives and discovered that there was a video that included my husband and I in 1988 talking about our future and our life in Japan. He was wearing the "Venus Soap" shirt in that video so I was able to take a screen capture of it. In this video he said, "Venus Soap, it saves rubbing... but we don't use it because that's the funnest part." Now you can see why I married him. ;-) 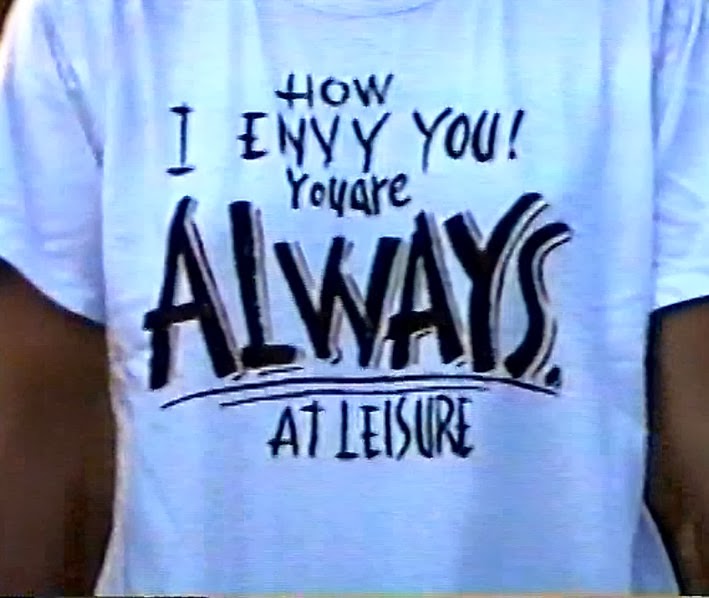 The only other shirt that I have a record of was also from the video and this one was being modeled by my sister-in-law. This shirt was a gift to her for her birthday in 1987. My husband had sent it to her. This particular message seemed goofier at the time than it does after years of working in Japan and hearing again and again about how Japanese people envy Americans for their (supposedly) long vacations and short working days. 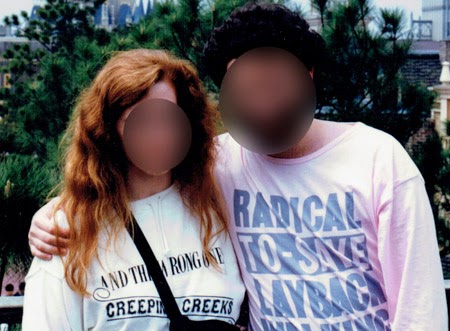 You can look at our shirts, but not our faces. Sorry! My shirt says "And the wrong one" and "Creeping Creeks". There's also an enormous paragraph of nonsense at the bottom which is lost in time now, but it mentioned the Turkey (the place, not the bird).

There was also a pink and grey shirt which I absolutely loved, both for its fit and its message, which said in block letters on four different lines: Radical To Save Laid Back Walking. I remember that shirt because we had two of them and both my husband I wore our respective shirts when we went to Tokyo Disneyland and portions of it are visible in photos from that day.

My husband also found a T-shirt for me which was not particularly funny, but suited my situation at that time. I worked for a now defunct social services agency called "Transitional Living". It was common for us to refer to it as "TL" or to write TL instead of saying the full name. Somehow, a Japanese T-shirt cropped up which said the words "TL Connection" on it. I have no idea what it meant to them, if it meant anything at all. It could be that such an abbreviation had some special meaning (as KY does now) which fell out of favor by the time we knew enough about Japanese culture to understand such things. The Wikipedia page on Japanese abbreviations does not include it, so it may have meant nothing at all, but it was a great gift for me at that time.

I really wish I'd saved these shirts, or even scraps of them to sew into the craziest of crazy quilts. Unfortunately, not one of them survived and only a handful survive in picture form. I'm sure there are many that are lost forever in the cobwebs of my mind and will never be retrieved. I think we took them for granted because we figured there'd always be more of these crazy things. There are still some out there, of course, but not nearly as many or as funky.

If any of my readers have a notion about why the number of these things has gone down and why the quantity and type of wording have changed, or if your experience is that they are still available in abundance, I'd like to hear your thoughts and experiences in comments.
Posted by Orchid64 at 8:00 AM