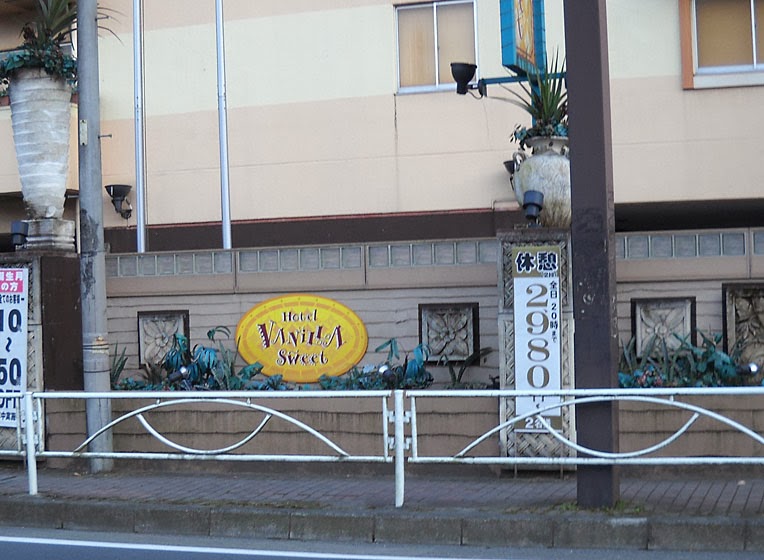 One of the things that my husband and I wanted to do before we left Japan was to stay at a love hotel. For those who don't know what such things are, they are what they sound like. They rent the space out for a limited time so that people who want to have trysts can get a room. They're also billed as being for relaxation or other activities, but few people check into a room with a bed just to chill. It's a lot cheaper to go to a coffee shop and buy a $5 cup of coffee and use their free wi-fi. In a culture in which many young, single adults live with their parents and in cities in which few people have cars or public spaces where they can get privacy, love hotels have served an important purpose.

Unfortunately, my husband and I ran out of time and we never had the chance to enjoy the dubious pleasures of a love hotel. That may sound weird from two people who lived in Japan for 23 years, but, after deciding to go back to the U.S., we had an enormous bucket list of things to do before leaving and it didn't make the cut. Obviously, as two old married people with an apartment of our own in which to do any dirty, sinful business that we wanted to get up to, we didn't need to go to one. We just wanted to experience the atmosphere and see what it was like. I also would have taken a ton of pictures inside the room and written a blog post about it at the time had we actually done it.

Though I didn't stay in a love hotel, I did learn quite a few things about them which you can only learn from someone who knows them from outside of what happens in the rooms. There are plenty of sites out there which will tell you what it's like inside of one. There aren't so many, if any, that will tell you in English what they're all about and what their future is likely to be.

One of my former students was a man who was in charge of managing a large number of love hotels. He worked under an owner who was looking to divest himself of them. The reason the owner of these properties wanted to walk away from them was that the rules in Japan regarding them had changed. He told me that love hotels are an endangered species. He said that the law currently says that there can be no future creation of such businesses. The ones that currently exist can continue, but no new ones can be built.

I'm not sure why this happened, but I can make a few guesses. One is that they aren't something that people welcome in their neighborhoods. They look seedy in some cases, tend to attract sex workers and their clients (obviously), and they also see a steady stream of short-term visitors, not infrequently arriving or leaving in an inebriated state. I don't think people who live near them likely feel entirely comfortable with the furtive business going on or perhaps with the atmosphere those places create.

My student wasn't entirely happy with the way things were going. He didn't want to lose his work and the plan that he hoped to follow through on was one in which he could buy the businesses from the owner before he surrendered them to another entity. Selling the love hotels was not going to be an easy thing, after all. The main reason for this was that they were losing popularity anyway. He said that part of the reason for this was a loss of interest on the part of clientele (something which would occur as a result of the increasing loss of interest in sex that we read about in Japan), the shrinking population of young people, and the limits imposed on remodeling and expanding existing hotels.

I asked my student why he wanted to buy out his boss's love hotel business when the industry was being bureaucratically suffocated and the customer base was shrinking. He had a plan, and it was based on sound thinking, but I wasn't sure how it was going to go over in Japan. After acquiring the hotels, he wanted to slowly convert them into retirement homes for those who needed assisted living. With the aging population growing, and families increasingly lacking the capability to look after their infirm relatives, he felt that former love hotels would be ideal because they had rooms with private baths that offered a lot of privacy and amenities. That privacy, for those who don't know, include shielded entrances for discrete coming and going, but also unobtrusive staff positioning.

The bigger questions about the business that I asked him were a little harder to address. The primary one was whether or not older Japanese folks would feel comfortable inhabiting a place that used to be devoted to fulfilling carnal desires. If they knew what it used to be, and it would likely be easy to find out or already known, would they avoid it? The other problem was regarding how the inhabitants medical needs would be met. While the rooms were easy to make comfortable and could be altered to remove their sometimes garish and lurid decor, and the baths were certainly large and accommodating, it's a sure bet that none of them had anything resembling medical support. He did say that it was not an easy thing or a sure one, but that was his hope.

In the end, I think my student gave up on his idea. Finding the money to acquire his boss's chain of hotels was too difficult and the uncertainty of his proposition was daunting. Though I had no particular interest in the preservation of love hotels, I did feel a little sad that this unique and somewhat amusing aspect of Japanese culture seemed to be facing extinction.
Posted by Orchid64 at 8:00 AM