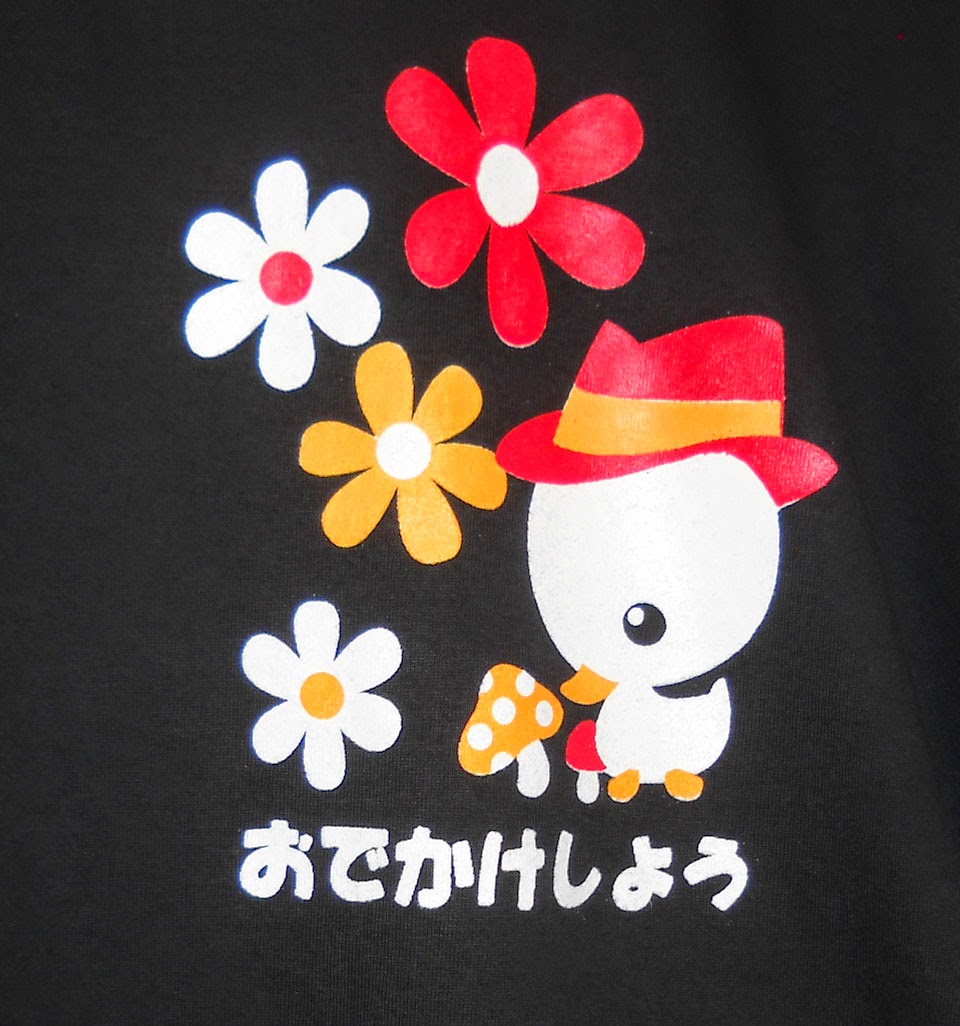 This final installment is more of an epilogue than a memory, though it will include memories. I'm sure that people who have gone away for a short trip or even a somewhat long one imagine my return to the U.S. was like a breath of familiar air as I stepped out into the world into which I was born. It wasn't. It felt more like being expelled from the womb into the bright, noisy, painful light of day. Coming home taught me a whole new understanding of the phrase "gaijin bubble". 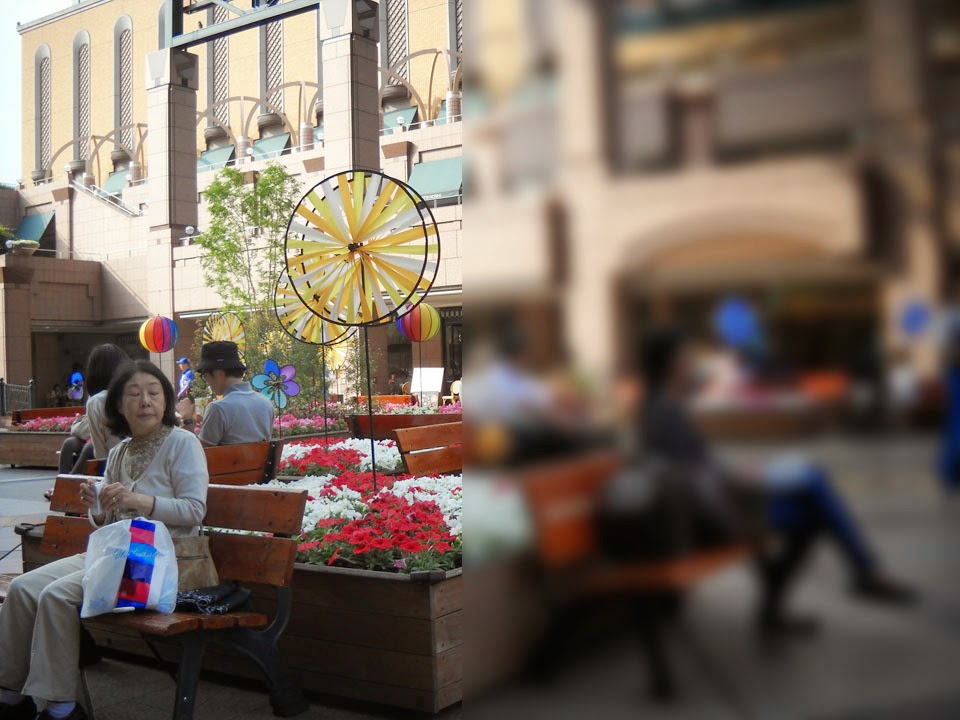 For those who are not Photoshop geeks and don't know what a gaussian blur is, I offer this example with the right half blurred and the left half clear.

The bubble that I lived in in Japan was one in which I was outside of society and not entirely aware of what was being said, written, or done in my presence. Because of my incomplete language skills, much of my life in Japan was like a version of reality that had had a gaussian blur applied to it. I could work out most of what was going on, but I had to focus and concentrate. If I didn't feel like paying attention or studying a situation, it was easy to not even know it was there. Tuning out was far easier than tuning in.

Suddenly, I had popped out into a world in which everything was crystal clear. I knew every word. I had to communicate with every person because I had no excuse for not doing so. There was no shaking my head and smiling while waving my hands and either pretending that I didn't understand in order to abdicate any responsibility or escape a situation or actually not understanding enough to fully take part in it. I was fully engaged and had no way to walk away that I didn't have to be fully responsible for. After years of purposeful tuning in, I was utterly out of practice when it came to tuning anything out and it was a full assault. Even now, two years later, I find it hard to place much in the background and remain hyper-aware. I can't undo over two decades of patterns in such a short time.

Living in Japan was like having spent 23 years in a cocoon that both protected and isolated me from the outside world. Sometimes, I hated it because I wanted to be more engaged with things and I resented the limits that shell placed on my life. Only after leaving it did I realize how well and truly it protected someone of my nature from things which would potentially do me harm. I'm a highly sensitive person, as I've said before. I see, hear, smell, and feel things more strongly than average people. I'm easily startled and my nerves are quickly jangled. I'm like a wind chime that tinkles in the slightest breeze whereas others are like rocks that are only moved by great force. I have no choice in the matter. It's the way my nervous system is built, but I didn't realize how being in a different culture buffered me in ways I did not appreciate until after I'd gone.

What was worse than being fully present in this seemingly new reality was the fact that I was a child in the ways it now worked. I didn't know how to use a debit card, work a gas pump, use a self-check-out, or when and how to pay for things in various circumstances. I didn't know that you could sign your name on a credit card transaction on a screen using an electronic pen or that you could tip on your credit card bill at restaurants (as I didn't have a credit card before I went to Japan and they don't tip).

I spent a lot of the first six months of my time in America apologizing to people for my ignorance and mistakes by mumbling about how I'd been out of the country for over two decades and didn't know how things worked. In essence, I fumbled around everyday things in the U.S. the same way I used to bumble my way through them in Japan in the early years. The only difference is that, there, I was a gaijin (foreigner) and my ineptness was excused because no one expected me to know what I was doing. Here, I was just an idiot who couldn't do or understand what even many kids knew and understood. A ten-year-old had greater mastery of the American environment than I did.

I've realized all too often, even now, that Japan isolated and insulated me in ways I failed to appreciate while I was there and being able to bumble and not be snorted at derisively was another piece of the gaijin pie. My foreignness kept me in and others out, but that had enormous benefits that I failed to see until I'd lost them. Yes, it was harder to keep and make good friends, but I've found that the free and easy access that people have to me here has been enormously disruptive and disappointing at times. People contact me when they need something from me and don't when they aren't in any need of my assistance.

Often, the lack of that old cocoon means people can be invasive and blocking them is awkward for me or impossible without alienating them. I'm sometimes taken aback at the vitriol that can be incited by putting up any sort of boundary with people in the U.S. It's as if there is no greater insult to them than failing to meet their needs. The attitude seems to be that I am obliged to give them whatever it is that they want to take and my not permitting them to barge in and grab as much as they want when they want it is an affront. There is frequently no consideration for me or my needs. There is little understanding of boundaries. The entitlement people display is shocking in its size and boldness. The boundaries in Japan were often frustratingly thick and often impenetrable, but they protected me, too.

While Japanese people often had curiosity about my life and asked about me, often because they saw me as an alien being that they wanted to understand - an objectified way of seeing me - people in America rarely express any interest in me or my life at all in social settings. Curiosity in the U.S., it seems, is dead, or at least wheezing its dying breaths. I have had social gatherings with people for hours and hours and often multiple times in which not one question, including "how are you," has been asked of me.

I've also had people act as if my asking them certain questions, ones that I routinely asked of people in Japan and an eyelid was never batted, is an affront or invasive. In social situations in the U.S., I'm not sure how we're supposed to talk to each other if they don't ask me anything and they're so touchy about what I ask them that I have to navigate a field of social landmines. Most people think you magically "know" what is right according to their values even when they are not explicitly offered and they won't offer helpful feedback about them when you trespass on their issues. There is an assumption that "correct" social mores and manners are their own private ones despite the lack of an organized social code or set of manners in the U.S. When you unintentionally step on one of their (often idiosyncratic) landmines, they are offended and hold a grudge, often acting out passive aggressively in future interactions as they continue to lick a wound you never meant to inflict or anticipated would be hurtful.

In Japan, this was far less of an issue for me. My foreignness engendered rapid forgiveness. Sure, I was the dull-witted pet gaijin, but the underestimation of me that accompanied their sense of my inferiority in comprehending their culture also meant that they forgave me when I piddled on their cultural carpet. The fact that the rules are more explicit and most people shared a common mentality also meant that, at least eventually, one could figure things out and act in rough compliance. If you screwed up, you were forgiven. If you did things right, you got a lot of credit. It wasn't always that way, but it often was.

There is less of such forgiveness in the U.S. in my experience. I'm simply supposed to be like everyone else magically in social circumstances while also being an individual who is unique and different from everyone else. Is it any wonder Facebook is filled with drama when we all operate by different unwritten and unspoken rules because we're all just so non-conformist and individualistic yet we expect others to read our minds? We expect order and are offended when life does not unfold in accord with our sense of it, yet the culture is incredibly chaotic. Having been outside of that long enough, I can see that about American culture now. When I lived inside of it, I had no idea that it could be any other way.

Since returning, America has very often felt like the "foreign" land full of people who have ways of living which annoy and frustrate me. Their unfamiliar ways cause me to hate it here sometimes and be angry and disappointed a fair bit of the time. Frankly, it's just like my early time in Japan when I was going through the stages of cultural adjustment, but it sometimes feels worse as this is supposed to be my home and it "shouldn't" be so difficult. Part of the reason for that is that this is supposed to be my home culture, but a bigger part of it is that I don't have that nice hazy, gaussian-blur-like filter of not understanding exactly what is going on to block out a lot of the annoyances or that big, comfy cocoon that separates me from the outside world.

Sometimes, it feels like I'm being pelted by hail the size of baseballs and there's nowhere to run for cover. This sense of being under siege by a culture I lost touch with has abated somewhat, but I strongly miss the odd sort of "protection" I had in Japan more than anything else. This, more than anything, in my opinion, forms the unconscious backbone of why many people find it so hard to leave Japan and the sense that it's a Neverland in which we can avoid the pain of growing up and responsibilities of the "real' world of our home countries.
Posted by Orchid64 at 8:00 AM