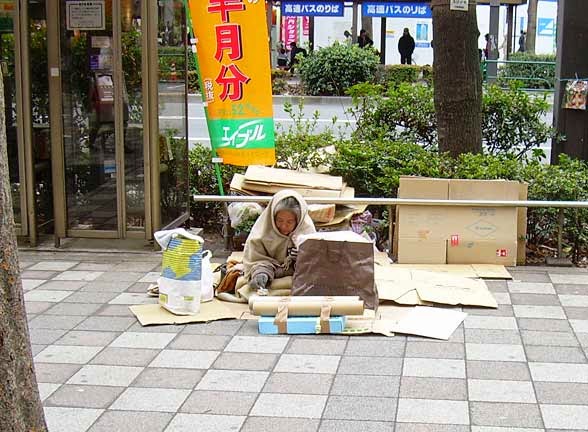 I've lived in two different apartment complexes since returning the U.S. and, in both places, homeless people came by several times a week to poke through the recyclable trash for bottles and cans that could be redeemed for deposit. Though my half of the complex locks its trash containers, the other half doesn't, so I'll see someone with a borrowed shopping cart parked in front of their blue bins looking through other people's junk for something worthwhile.

The thing about this is that I live in an area in which people are in the solid middle class (albeit one of the most ethnically diverse areas of such types in the country) and that borders on or is close to areas which are extremely affluent (Cupertino, Palo Alto). I can see the income disparity in living, breathing form every single day and it makes me very sad and a little angry. Seeing a designer dog boutique selling frozen yogurt and cookies for canines next to a coffee shop at which a homeless person is routinely booted away from bothers me even more. People have money to give their dogs hand-made treats, but not to help the homeless guy living out of a shopping cart.

In Japan, there were homeless people, but the income disparity there is much smaller than it is here. Most people are in the middle with some who are fairly rich and some who are fairly poor. However, the super wealthy don't tend to be clearly delineated between the middle class as they are here. And, while there were homeless, there weren't nearly as many, they weren't as young, and they were often mentally ill rather than down on their luck.

I miss the relative income equality in Japan and the impact it had on the daily living experiences and sense of comfort that everyone had.
Posted by Orchid64 at 3:00 PM