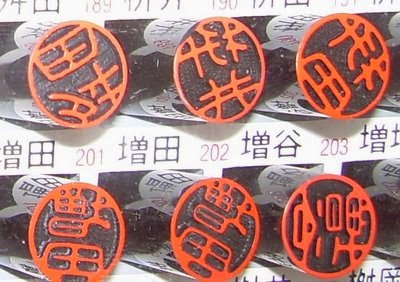 For those who don't know, a "hanko" (or inkan), which used to be referred to as a "chop" by Western folks, is a little seal that you apply ink to and use instead of a signature. In Japan, many families use them to "sign" official documents instead of writing their names. You can get them made for fun, but to use them for banking or contracts, you have to have a registered hanko (jitsuin). They're more expensive and you have to go through some bureaucratic rigmarole to get it squared away... and who needs more of that, especially in the land of red tape?

Every time my husband and I did something official (banking, money exchange, work or rent contracts), we were asked to present our hanko. We never had a hanko and refused to have one because we viewed it as a security risk. It was rare, but it did happen that people's bank books and hanko were stolen on occasion. If someone has these two items, they can go to a bank and take out money from your account. The idea that I could lose or have my "signature" stolen was one I couldn't overcome.

I tried hard to see the value of all aspects of Japanese culture. My guess is that the use of hanko was something that made sense as a way of allowing all family members to manage official documents, not to mention that it probably allowed for a uniform comparison of seals and permitted illiterates to still apply their mark to papers back when more people could not read or write. It no longer makes a great deal sense to use them, but they are still used. Sure, there's a certain "cool" factor because of the novelty in Western minds, but would you really want to have something which would function as your official legal sanction rolling around in a desk drawer or at the bottom of your handbag?

I still don't miss being asked if I have a hanko, and having to sign my name in the tiny little circle where the stamp was supposed to be made when I revealed that I didn't have one.
Posted by Orchid64 at 8:00 AM