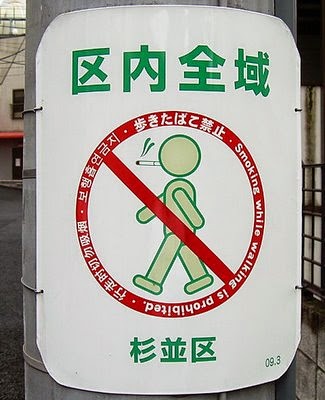 As I mentioned in the original post, Japan used to be a smoker's paradise, but they cracked down pretty hard and now you aren't even allowed to smoke in the streets. I figured that, while there are fewer smokers in the U.S., there are no restrictions on smoking outside so it would be worse here.

Since I'm living in California now, and smoking is not allowed in restaurants where I'm at, I don't have to worry about that at all. The question is whether or not I have to put up with it in the streets or other public spaces. Fortunately, generally speaking, it's uncommon to run across anyone smoking... except apparently around my no-smoking apartment complex at which people seem to smoke very far from my apartment, but I smell it anyway.

I think if I lived in a place where there were more smokers walking on the streets, I'd miss the restrictions in Japan against walking and smoking more. As it is, it seems the number of smokers in my area is low enough that it's not really an issue most of the time.
Posted by Orchid64 at 8:00 AM