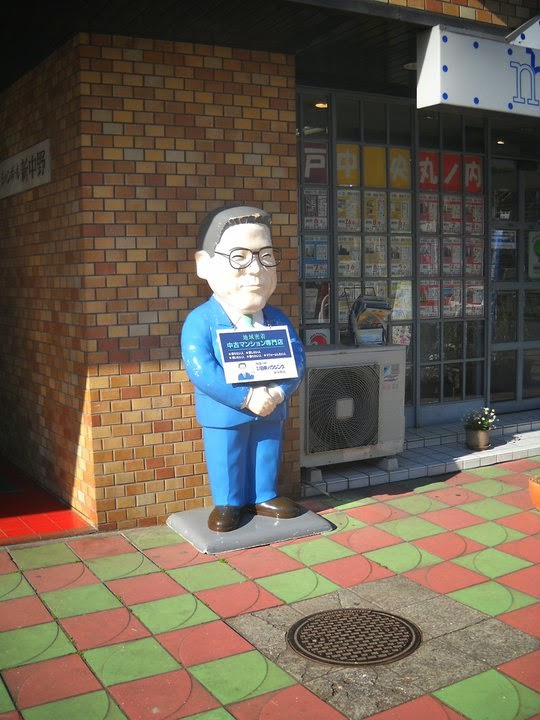 My previous posts about goodbyes with students may lead my readers to believe that every student loved me to pieces and sobbed herself into a state of apoplexy at my impending departure. In fact, the reason for my focusing on those people in my initial posts about goodbyes was more about what left the biggest impression on me than an attempt to self-aggrandize or paint myself as someone who left an indelible impression on everyone who crossed her path. No small number of people simply did not care when I left, and one of those was a student who I taught for quite some time, went away for a year or so, and circled back into my life three months before I left.

When I first starting getting private students via a referral service, they sent me one student at a time. After I collected a few who gave me very positive reviews, I started getting offered more people more often. Anyone who knows the private tutoring game in Japan knows that building a stable of private students is difficult, but more profitable than teaching in a conversation school on an hourly basis.

Because of various health problems, I wanted to get as many students as possible to help build up an income that I could generate from my apartment. Due to my limits, I accepted nearly anybody who was sent my way regardless of their level. This was not only to pad my coffers, but also because I wanted to agency to believe that I would not arbitrarily reject anyone based on idiosyncratic preferences.

After about six months, I was offered my fifth private student and the oldest person I had taught to date. This student, who I often referred to as "little old man" ("LOM") to my husband, was 74 years old and had worked at NTT for his entire life. His life was a classic example of that of a middle class Japanese man. He started at the bottom, rose through management, and remained at the same company for his entire life. He made more money over time and did less work, and very likely was nearly useless by the time the door failed to hit his ass on the way out.

When retirement came around (at around age 65 for him, I believe), NTT did something which is very common in Japanese companies. They told him that he could keep working there doing the same job, but for about half of the salary he had been receiving. LOM decided he'd rather spend his days golfing and puttering around his house than put in a day's work at NTT for less scratch. He had a son and a wife, but neither of them factored much into his retirement plans or activities. Like many men of his generation, his family was something he had to fulfill specific needs and expectations, and he conducted much of his life separately from them.

In his lessons, LOM rarely talked about his wife or son other than to mention an occasional visit to his son's out-of-town home. When I asked about his wife, he essentially said the same thing so many older men do about their wives - they were more like siblings and stayed out of each other's way for the most part or they would argue too much. Even when they traveled together, they didn't tend to stick together unless logistics dictated that it be so.

There were a lot of things that LOM preferred to talk about and I spent lessons hearing a lot about golf and the tiniest details of his daily life. In one lesson, he announced that he wanted to tell me about how he brushed his teeth and meticulously described how he'd brush each part of his dental structures and in what order. "First I brush my top teeth on the left side, then I brush the top teeth on the right side. Then, I brush the front teeth." It was scintillating stuff.

He was much more interested in talking about what he did than how he interacted with anyone and the more detailed the talk about his mundane activities, the better. The only excitement that he ever talked about with me was when he had all of his luggage, wallet, and passport stolen from a rented vehicle during a vacation to Hawaii. They were stolen, in part, because he left his car unlocked, but he did so because he subscribed to the all-too-familiar notion that Hawaii is a part of Japan and not the United States. It's an easy enough mistake to make when the tourist areas cater so lavishly to Japanese interests, including providing Japanese language services.

It was my job to be the teacher that he wanted me to be, and he asked me initially to teach him English "from the beginning" and I tried to do as he instructed by starting with a low level English book. It's important to note that his English was not high level and he had a lot of grammar and pronunciation problems. His issues were the sort of dyed deep in the wool variety that is so common among older learners who never studied long or hard nor lived abroad. Though he asked me to teach him from the beginning, he soon grew impatient with the process and that's when he started planning his own lessons and talking about things like how he cleaned his house step-by-step using a floor sweeping thing which has a big roll of weak tape on the end (these are popular in Japan for picking up small particles on floors, but are usually used as lint removers in the U.S.) and how he conducted his dental hygiene routine.

LOM needed to run the show, even when he told me he wanted me to do it. On several occasions, he'd tell me he wanted a particular type of lesson and I'd comply only to have him change course shortly thereafter. First it was starting with a textbook from basics, then it was practicing various grammatical structures, then it was talking about everyday things, and so on. He knew what he needed or wanted to learn, but he didn't know what it would entail to actually do it so he kept rearranging the lesson structure and focus. I did the dance he asked for awhile, until he asked me to do a different one.

For most of the years that I steadily taught him, there was one thing which always made him happy and that was talking about golf. Much of his desire to learn English was based in his hobby. He had done a homestay in Florida at one point and met some nice folks there, but he did it not to meet those people, but rather to gain access to the golf courses at the retirement community there. Note that he did this homestay after retirement. While the image of the typical homestay person is that of a student who goes to school, it is possible for old folks to do homestays as well (often with other older folks). He needed to keep his English level where it was if he had any hope of communicating with these people and gaining access to their compound and accompanying golf greens.

LOM's lessons were very boring for me for a variety of reasons. One was that he wanted to talk about such mundane things. Another was that his English level was so low. Yet another was that he wasn't making much headway no matter what I did. This was in part due to his age and entrenched problems, but also because he never stuck with any plan that addressed his weak points. Since he had no compelling reason to improve (such as getting a TOEIC score or needing English for work), I never counseled him about how his inconsistent and idiosyncratic approach was derailing improvement. I think he already knew it, but he chose autonomy over better skill. Based on his demeanor and whimsical approach to study, I'm pretty sure that he would have stopped taking lessons if I pointed out that he'd never improve if he kept going as he did.

The biggest reason that the lessons were tedious was that LOM was the most self-centered person that I had ever known in Japan. He rarely missed a lesson, so I had nearly 300 lessons with him and he never once even asked a perfunctory "how are you?" He never asked me a question about myself or my life and it was clear from his focus that he had no interest in talking about his family or friends. It was always about him - every little detail was about him.

However, it was not a student's responsibility to amuse me or show interest in my life and I always knew this and kept it in mind. It was my job to give them the type of lesson they wanted and to show interest in them. That is what I diligently did for LOM until his interests changed and he decided to stop studying English in favor of his new passion. After years of learning English because he loved golf, he decided that he liked social dancing more than improving his swing or score. With a loss of his need to make annual pilgrimages to Florida, he stopped studying English except for contacting me once or twice a year to help him understand and reply to the occasional letter from his former homestay family.

In January 2012, shortly before my departure in March 2012, I got an e-mail from LOM asking about studying with me again. I told him that I would soon be leaving Japan and would no longer be available to teach him. The response he gave me was... nothing. He didn't wish me well in America. He didn't say, "thank you for your reply, can you recommend another teacher?" He didn't even say, "I'm glad you're going. You suck!" I was greeted with nothing but silence.

The truth was that I was a tool for him to use and he paid me for the privilege so I have no complaints or criticisms. For some students, that is what the teachers are, and he not only didn't shed a tear at the news of my departure, but didn't bother to put in a socially appropriate word. I was something useful that he picked up when he needed and put it down when he didn't. Now, that tool was going to be out of reach so he'd have to find a different one and that was all there as to it. (to be continued)
Posted by Orchid64 at 8:00 AM