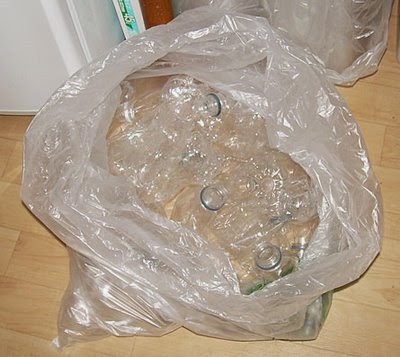 Times have changed since I lived in the U.S. and I'm also living in a different area. I grew up in a rural area and the way we handled our garbage tended to be to either burn it in a trash pile some distance from our house or to haul it to the local dump. I never thought about who owned/managed the town dump, but I'm guessing our taxes rented the space for everyone to leave their unwanted junk. The benefits of our system was that getting rid of trash was easy. The down side was that there were rats in our trash pile in warmer times.

Japan, as everyone has heard, has a highly diversified recycling system and I had to keep seven different trash receptacles in my tiny apartment in Tokyo. That was hassle enough, but we were also required to wash everything well before getting rid of it. This was no small hassle, especially given my limited kitchen space and how long it takes something like a milk carton to dry once it has been washed.

In the area that I'm in now, there is what is called "single stream" recycling. That means I don't have to have an elaborate array of separate receptacles, but I do have to separate what can be recycled and what cannot. We don't have to wash things, but I have read that it is encouraged. It's my guess that it may become mandatory at one point, but the local governments are taking this recycling thing one step at a time. First, they have to get people to separate trash, then they'll worry about washing it.

I'm somewhat torn about the trash washing now. I know America's handling of recycling is sloppy and substandard, but the Japanese way was enormously complex and troublesome. In the end though, I'm the type of person who will opt for the good of the many over my own good. I'd trade having to meticulously separate and wash my trash again for a better and more thorough recycling system in the U.S. despite the hassle for me personally.
Posted by Orchid64 at 8:00 AM