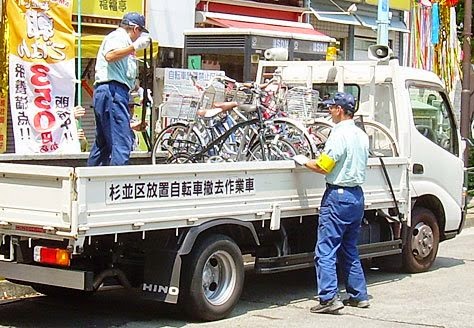 Bikes being taken away for illegal parking. To retrieve them, you had to wait several weeks and then pay $25-$30 to get your bike back.

For many years during my time in Japan, I suffered from severe back pain. I'm not talking about the type of thing where you exert yourself and your back hurts later. I'm talking about the thing where you wake up every morning, walk for a minute and agony sets in. If you walk or stand for too long, you suffer burning, agonizing pain during every moment that you are sitting. There was a time when I'd get up in the morning, go to work in pain, and sit there for 6 of my 8 hours in horrific pain. This ended in my taking two months off and working from home in bed.

During this time period, which lasted, oh, about 9 of my 12 years at the company I was at, using a bicycle was my salvation. I even rode the bike to work rather than endure the suffering of walking 15 minutes from the local train station to the office. Even forty minutes of sweating through the Tokyo summer (one-way) was better than the pain I endured. Unfortunately, my ability to use a bike to mitigate my pain was monumentally undercut by the increasingly limited and difficult bicycle parking situation. As I mentioned in my original post, it went from a situation in which I could park nearly anywhere for any length of time to nowhere for niggling amounts of time. Eventually, the parking situation became so hard that I took to struggling to walk the 9 minutes to the subway (stopping three times to rest to reduce some of the agony as it got worse the longer I walked).

I don't miss how owning a bicycle turned into a nearly useless thing because someone decided that having bicycles parked along the street in Tokyo was too troublesome or aesthetically displeasing to permit it.
Posted by Orchid64 at 8:00 AM