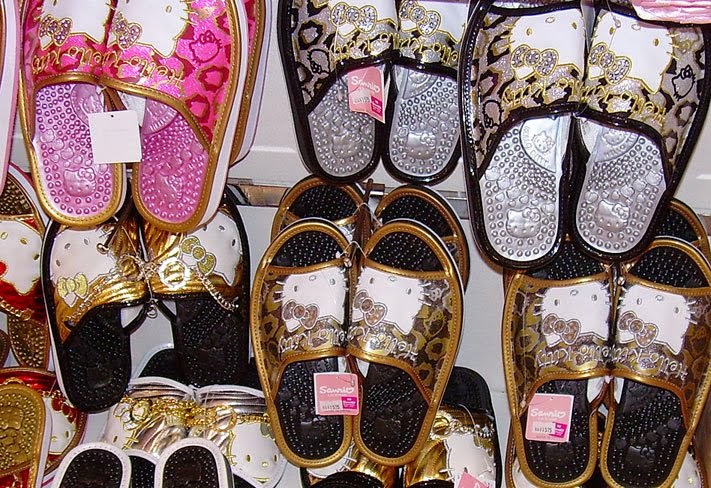 One of my friends recently introduced me to the term "Baader-Meinhof Phenomenon" (aka the "frequency illusion"). This is when something is brought to your attention and then, coincidentally, something else of a similar nature occurs. For example, I was walking to a store recently and noticed that several cars parked along the street had solar-powered bobbing plastic flowers in pots. Later that same day, I was looking through my stash of (literally) thousands upon thousands of Japan photos (for pictures for this blog) and stumbled on a photo of exactly those plastic flowers as a prize in a UFO Catcher (claw game) machine.

In regards to this post's topic, I had a Baader-Meinhof experience that related to it within the last week or so. The number of this post for review came up shortly after an occasion in which someone had to come into my home, but refused to remove his shoes. Our apartment is strictly a "no shoes" zone because we want to keep the floors clean and not have our bare feet turn black when we walk on it (which is what happens in American apartments/homes in which you wear shoes).

In this case, an inspector was reviewing the apartments and a photographer was taking pictures of the interior of select places including ours. I was fine with them coming in, but the photographer claimed he was wearing orthopedic sneakers and couldn't walk on flat floors and refused to take off his shoes. Incidentally, I think this was a big, fat lie and he just didn't want to have to fuss for the short time he'd be walking around our apartment.

This incident made me think about how I appreciated the fact that it would not even be a question in Japan that the shoes would come off. In fact, refusing or putting up a fuss in any way would be considered an egregious lack of manners and respect. So, yes, I still have good reason to miss the shoe removal culture.
Posted by Orchid64 at 8:00 AM