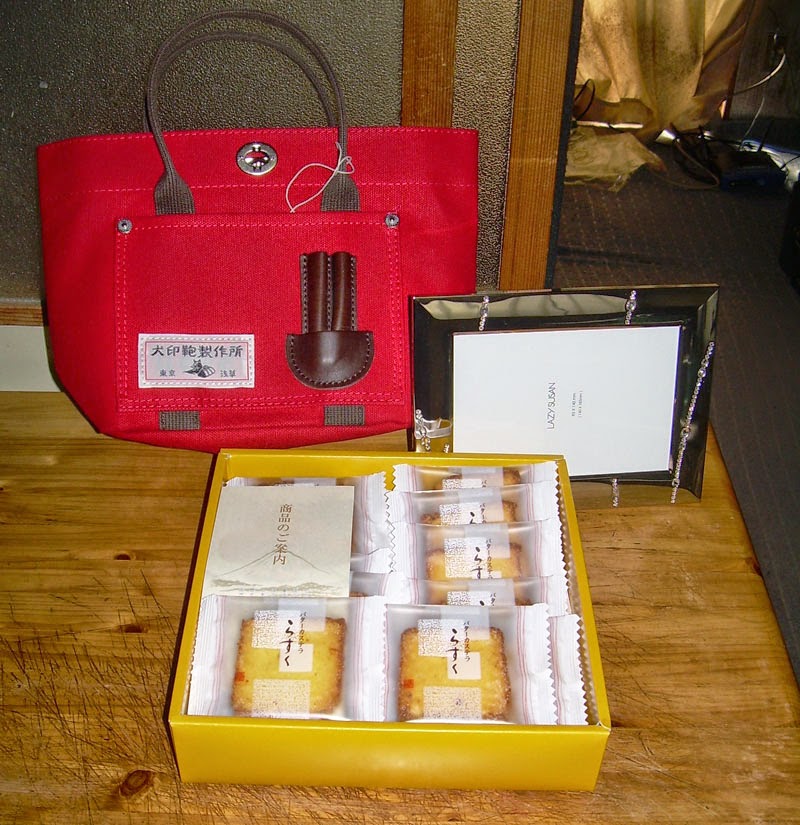 The red bag has my name embroidered on the other side. It's from a well-known maker, or so I was told. K. also gave me a picture frame and rusks. It was quite a generous pile of gifts considering she hadn't seen me for a very long time.

Compared to the rest of the animal kingdom, human babies are born essentially premature and quite helpless. A calf will be up and walking soon after it is born, but a human baby takes between nine and twelve months to accomplish a similar feat. This is one of the many things that separates us from animals, and what may appear to be a big mistake on the part of mother nature is actually a means of accommodating an enormous advantage.

Humans have big brains compared to other animals. This is so because they have a highly developed prefrontal cortex. This is the part which essentially separates humans from animals and requires that our mothers give birth to us early. If we were more developed, our enormous heads wouldn't fit through the birth canal, so we are born in a more helpless state and take longer to mature than other animals. It's also speculated that this big brain is what allows humans to possess a certain consciousness. It is theorized that that is what has us talking to ourselves, speculating about the past and the future rather than living in the moment or acting only on current needs, and what allows us to weave complex philosophies of life.

I've spent a good deal of my life knitting, crocheting, and embroidering life philosophies. I'm not claiming that I have all of the answers. In fact, I'm not claiming that I have any answers at all - at least not for anyone other than myself. In the end, that's all any of us have and I do my best to respect that other people aren't going to share in my worldview or weave the same philosophical and, yes, spiritual cloth that I am choosing to wear. To each their own. I won't push my views on you, though if you're reading this, you're sort of asking for it to some extent, and I'd appreciate it if you don't force yours on me.

That being said, I can't talk about some of my parting experiences in Japan without mentioning a particular philosophical bent that I possess. My big human brain (which is no bigger than other human brains - they're all big) compels me to look for patterns and to find meaning, even if neither actually exists. One of the patterns that it has discovered and, in one of the conversations with myself that my unconscious has revealed, is that we are all in some way connected to one another. The longer and more strongly we associate, the stronger the bonds between us.

I tend to think this  has to do with energy and the way atoms and molecules communicate with each other beyond human sensory capacity to detect. If I feel linked to someone, I think that my molecules have formed some sort of atomic-level relationship. You can frame it any way you want, or reject the concept entirely as utter poppycock or new age drivel. However, I can say that, as my days in Japan dwindled, several of the chickens that had flown the coop came home to roost. That's my colorful way of saying that students who had stopped taking private lessons with me years before suddenly started popping up again near the very end. The timing was very peculiar, and the truth is that I hadn't actually "lost" that many students anyway. Only one that I had a long-term  (more than six months) relationship with didn't come back or remain with me throughout the 6 years that I was doing private lessons in my apartment.

One of them contacted me a few weeks before we left. That one was the biggest shock. For simplicity's sake, I'll refer to her as "K." She was someone who I had taught for about a year - an accountant for a French insurance firm who studied English for her job - and I hadn't had contact with her for at least two years. To my husband, I often referred to her as "the sad sack". She rarely smiled and every week when I started the lesson by saying, "how are you?" She'd reply with "not good".

K. was in her 40's, a little older than me, and lived with her father and brother. She wasn't particularly happy with them as they tended to be lazy and her father was prone to not doing any housework. The house she lived in was old and dirty, but she wasn't sufficiently unhappy to move out into her own place. It was bad, but not that bad.

When I first started teaching her, K. worked for a Japanese insurance company in the accounting division. She was often worn out and had little time of her own. Occasionally, she'd complain about her bosses or coworkers. She was the student who first introduced me to the concept of "amae", or someone who depends on others selfishly. In her office, she had a coworker who she said often behaved in that fashion and she resented this behavior, yet still indulged it as a means of keeping harmony within the office.

The truth about my feelings regarding K. was that I felt bad for her. She seemed to work hard and to not be appreciated for her less tangible qualities and had a low estimation of her own worth. Though she had a Master's degree and accounting certifications, she was unhappy in her career and talked often about changing jobs.

I think a lot of her sense of her lack of value stemmed from her physical appearance. Her teeth were bad, worse than even the somewhat average Japanese badness because some of hers were brownish and looked like they were decaying. I never asked her about her teeth, but she did occasionally mention trips to the dentist and how she had problems and toothaches. She also talked about her dental hygiene habits and I was certain that her issues were genetic and not based on a lack of personal care.

Besides her teeth, K. was slightly thick-bodied. For a Japanese, she may have been considered overweight, but she simply was not slender or petite. If she had extra body weight, it was minimal, but she wore clothes that constantly made her look older and frumpier. When she arrived at my apartment wearing pieces which I found attractive, as she sometimes dressed up to meet former classmates or colleagues after our Sunday morning lesson, I always complimented her on her choices. It seemed she got very little in the way of affirmation of her value, so I gave her what I could when I sincerely felt it.

K.'s English lessons were often more tiring than those of other students. It wasn't that she was incapable or didn't try hard, but I think she was often taxed in her energies before she even showed up at my door. She'd progressively rush through repetitions or words and not focus. Her problems were persistent and intractable. I don't know if I was helping her at all to progress. She possessed a high level of vocabulary already, but she often pretended to understand when she didn't and her pronunciation problems seemed set in stone.

I also found her negative outlook and energy exhausting at times. Though I wasn't pouring energy into pepping her up, it was hard at times to not be drawn into the grayness of her worldview. She felt trapped and unhappy, though she did actually get a new job at a French insurance company after some time. That helped her escape her old work environment for one at a foreign company that would follow a different working culture. I was very happy for her when she changed jobs, especially since she seemed to work a lot of overtime and weekends. After awhile, K. decided that she needed to invest much more energy in preparation for certain types of accounting qualification exams than English and she said she'd study English independently. I understood, and I was slightly relieved as it often felt as if she walked in with a storm cloud over her head that colored my day as well.

K. was with me for going on two years and, once she left, I never expected to see her again. I was shocked when, quite suddenly, she sent me a message asking if she could friend me on Facebook. When I replied, I told her that I was leaving Japan very soon. Much to my surprise, K. asked if she could come and see me to say goodbye in person.

I never felt especially close to her, but the day before I left, she showed up bearing gifts. While K. looked very much like herself when she came to my apartment, the cloud she'd carried with her seemed to be gone. Her face looked brighter, and her hair, clothes and make-up were done better. I told her that she looked great and she replied that she was making an effort to "look more beautiful". Her pictures on Facebook reveal that she challenges her body with weight training and she's going to parties and socializing more. I was so happy for her that she seemed to be doing better.

During her visit, the sisters that I'd said goodbye to earlier came around for another "goodbye" because they'd forgotten to bring their gifts when we met for dinner. It was a little weird having them all there, but handy in getting pictures taken since I could pose with one person/party while the other took the shot. The strangest part was that the sisters started crying when I talked to them which caused K., who I hadn't seen in ages, to also start to cry even though she didn't have nearly as long or intimate a relationship with me.

The fact that K. made the effort to come over and say goodbye to me personally as well as arrange for personalized gifts was a real testimonial to how generous the Japanese can be. It also reflected how much they value and nurture the connections they make with others. Her kindness in the 11th hour of my time in Japan is something I will never forget.