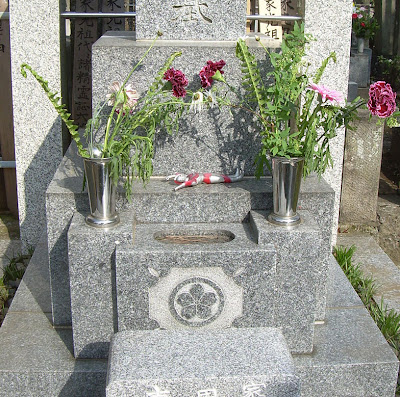 A Japanese grave upon which someone has left an Ultraman figure, perhaps in memory of a child who has died.
I grew up in a house that was about a 15 minute walk through the woods from a cemetery. When I was a kid, my cousins, sister, and I used to tromp through the woods and wind up in that cemetery where we'd run around and look at the stones to see what they looked like and said. Sometimes, adults who were visiting graves would get angry with us because we stood on the ground in front of the stones and they felt it was disrespectful to trample on top of the area where the corpse was laid to rest. Of course, we meant no harm. Growing up with frequent exposure to this type of experience made me wonder even at a young age why we put full bodies in the ground to rot like meat. Even before I came to Japan, I felt that cremation made a lot more sense, particularly if ones belief system embraces the idea that the spirit leaves the body at death (which most Christians do). I like the fact that it is the law to cremate bodies in Japan for a variety of reasons. It means less space is taken up by burial, and the entire unpleasant notion of decaying flesh is not an issue. It also pretty  much means Tokyo will never be attacked by zombies.*

I'll miss the fact that cremation is the default way of handling those who have passed away.