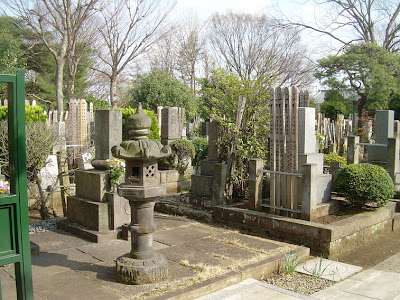 As I mentioned in the previous post, I grew up around a cemetery and I have had an interest in grave markers as a result. The designs of the stones, the words written upon them, and the epitaphs always told me something about the people and how they felt. Some of the graves even told me something about how the people looked as photos were included as part of the stone design. Burial markers are cultural and historical goldmines, as archaeologists have long known. They tell you something about psychology and about the emotions of the people who laid their loved ones to rest. The sizes of the stones, the choice of design or inclusion of a particular bit of statuary was fascinating to me. Sometimes, you had a profound sense of the person who died and the people who buried them and felt a connection to them. In Japan, however, the customs are rather different. They don't have individual grave stones and generally little in the way of personalized design. There's a family plot marker in which they place long sticks with names on them.

I mean absolutely no disrespect to Japanese burial traditions, but as someone who has an interest in experiencing something humanistic from burial markers, there usually isn't much of a story being told or much about the people to learn in the stoic nature of Japanese cemeteries.
Posted by Orchid64 at 12:20 AM