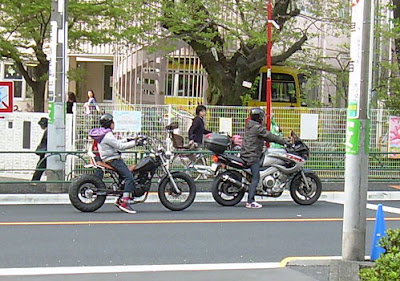 Our apartment is about a 30-second walk from a major road and a traffic light is just a few more seconds from the intersection of our little street and that road. At night, sometimes after midnight, and when our windows are open because of the heat, we will hear the ebb and flow of traffic as it zooms down the street and becomes suddenly silent when the light is red. Occasionally, rather than silence accompanying the halt of traffic, we will hear the noisy revving of engines following by the roar of mufflers when the light turns green and traffic suddenly moves again. These are the bosozoku, young idiots who do what they can to annoy others around them, but (generally) remain within the confines of the law.

They do a lot more to annoy other people, particularly drivers who they weave around in traffic, but mainly they are a major source of unwelcome noise pollution to me and I won't miss them.
Posted by Orchid64 at 12:15 AM