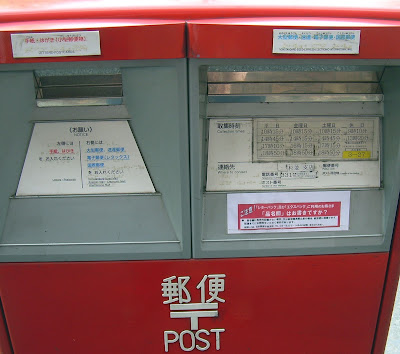 A mailbox has English information (and braille) about collection times and what sort of mail goes into respective mail slots. Click to see a larger version that can be read.
When I first came to Japan, kanji (Chinese characters) were everywhere and I couldn't understand a thing. In fact, I once went into a panic in Ikebukuro station during the early days when I worked in that area because I got turned around and couldn't read the signs to figure out which train to take. These days, Tokyo has turned into a relative paradise for those who are not fluent in Japanese. Most of the time, you can find simultaneous English language translations in important places. Our local government office distributes guides in English and offers free translation services one or two days a week for those who need it. In the U.S. right now, there is a lot of complaining about accommodating Spanish speakers by offering bilingual services (and talk of making English an "official language"), and it makes me feel sad because I think that it's not about catering to a specific group, but rather about recognizing that the world is becoming a smaller place. Note that a Japanese person has never told me that they resent the presence of English in their culture, though I know that such a thing probably wouldn't be relayed to me even is it were felt (because it would seem insulting to me as a foreigner).

Even when I don't need the English, I appreciate seeing it (and recognize the effort being made and the expense of it) because it shows a willingness on the part of the Japanese to accommodate tourists and foreign residents, and I will miss that.
Posted by Orchid64 at 12:15 AM