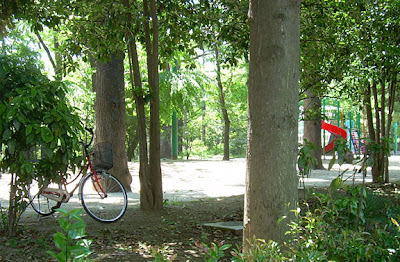 Tokyo is a big city comprised of 23 main wards. Each ward is like a city itself. In fact, many students will say, "I live in (name of ward) city." Within each ward are other large neighborhoods. Most neighborhoods have one or two parks, sometimes more, within their boundaries. The vast majority of such parks are nothing more than stretches of dirt surrounded by trees and cultivated bins of flowers or plots of bushes. There are some "real" parks with green grass in Tokyo, but they're relatively few and far between and far afield. You have to travel to reach them and pay to enter some of them. Locally, we're essentially greeted with hard-packed dirt. I'm not sure why most of the parks are plots of dirt, but I'm guessing it has to do with either the fact that grass takes more effort to maintain or people who use those parks abuse the grass and the caretakers give up on keeping the grass alive.

Whatever the reason, I won't miss my local parks being closer to parking lots than to nature.
Posted by Orchid64 at 12:15 AM