Will Miss #210 - the longer intestines theory 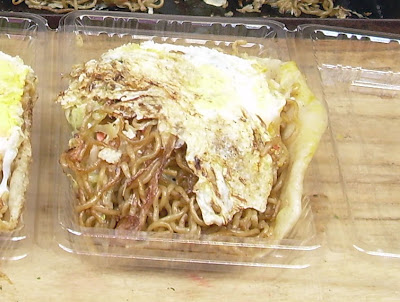 This is okonomiyaki, a type of pancake filled with junk. It only resembles intestines. Japanese people can digest this just fine as it is indigenous cuisine.
The overwhelming majority of Japanese people who I meet believe that they have special digestive tracts. In particular, they believe that Japanese people "as a race" (their concept, not mine) have longer intestines than people from other parts of the world. I've heard this theory, which has no basis whatsoever in fact yet remains widely believed, used to provide reasons for a variety of cross-cultural differences. They say it explains the propensity for slimness among the native population, a preference for Japanese beef (as their longer intestines supposedly can't digest American beef well), and the high incidence of stomach cancer in Japan.

There is little this old saw can't be trotted out to explain and it always gives me a chuckle when it pops up as an explanation. I'll miss that.
Posted by Orchid64 at 12:15 AM