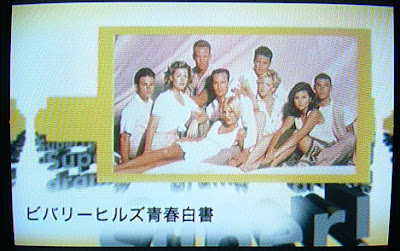 When I talk about high school in America, before I can complete a sentence, Japanese people tend to blurt out something to the effect of, "Oh, I know all about high school in America. I've seen Beverly Hills 90210." At first, I labored to explain that American kids do not live like the ones that you see on that T.V. program, but frankly, I don't think that anything will dissuade them from their belief that that show is a reflection of American teen life. And yes, old as the show is, it is re-ran on different networks all of the time. I don't think it has been off the air for more than 6 months during the duration of my two decades in Japan. It's just that important to the education of Japanese people about American culture.*

I'll miss this notion that you can rely on a television show about rich kids living in a specialized area to inform you about real life in the United States.