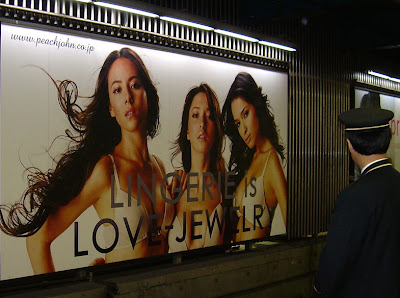 There used to be a commercial for video on demand services that showed a man who realizes as he's settling into bed that he forgot to return a rental DVD to the shop. He undergoes a series of difficulties as he finds a street blocked and he can't ride his bicycle except down a series of stone steps (which demolish his bicycle) and he has to run to the rental shop before midnight or pay an overdue fee. As he's running down the street, a pair of panties flies off a hook it is hanging to dry from and flies onto him. He takes it in his hand and looks at it just as the police see him and they start to chase him thinking he's a panty thief. This joke works because there are men who will steal womens underwear if they hang it on their first floor balconies and the idea that police would suspect a man of pilfering panties he's holding has verisimilitude in Japanese society. Because of this type of theft, you can't hang your underwear out to dry from first floor apartments (and many women won't hang theirs out at all, as you'll notice if you look at the type of laundry people hang outside their homes).

I won't miss these creepy, fetishistic panty thieves.
Posted by Orchid64 at 12:15 AM