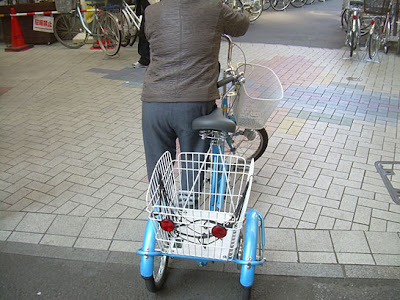 About once a week, sometimes more often than that, I see an adult riding around on what is essentially a big tricycle. Most of the time, though not always, the bicycle is being used by someone on the older side. I never saw such bikes back home, but I think they're a good idea not only for people who have problems keeping a two-wheeled bicycle stable, but also for those who take their bikes shopping and want to use a larger rear basket for groceries. Frankly, I think they're a great idea and wouldn't mind using one back home.

I'll miss seeing these adult tricycles.
Posted by Orchid64 at 12:15 AM