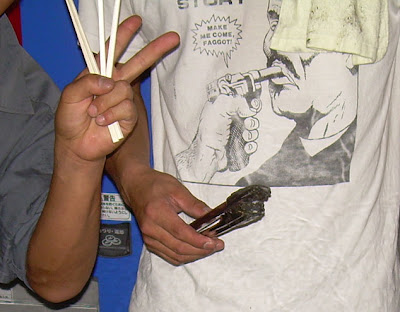 A T-shirt worn by a young man serving food at a summer festival in Tokyo.
Many Japanese people have outdated ideas about what gay men want or are like. Many of them believe that gay men want to be women, and that they dress up and act like women. They think that some of them hate women because they view them as "competition" and that you can discern a gay man from his movements, speaking style and passive nature. The idea that they're just normal people who happen to be attracted to people of the same gender is not very prevalent.

I'm not asserting that there are enlightened and modern notions of what gay men are like among all people in Western countries, nor that there are only unenlightened and old-fashioned ones among all Japanese people, but on the whole, the understanding of what it means to be gay is more akin to ideas held in the 1950's in other parts of the world, and I won't miss it.
Posted by Orchid64 at 12:15 AM