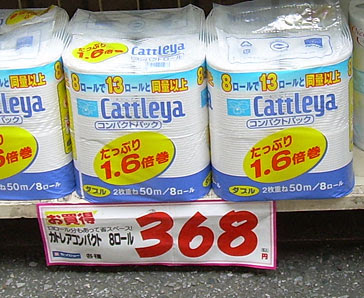 I don't know why these seem to be named for cow usage.
Yes, I know paper towels are the spawn of ecological evil and I shouldn't use them. That being said, considering the fact that I can only do laundry in cold water, I'm not exactly in a position to be cleaning greasy rags or getting germy ones clean and sanitary. I really have little choice but to use paper towels for things like cleaning a cast iron skillet or the toilet. Without hot water washing, life without paper towels is a good deal more difficult. For many years, my husband has been in charge of paper towel procurement and he always bought the cheap store-brand Costco ones (Kirkland). Until we ran out between Costco runs, I never realized what utter crap Japanese paper towels are. The sheets are smaller and thinner than the cheapest American paper towels. They're closer to newspaper than "towels". You need to use two for nearly any job so you end up going through a roll in no time flat.

I won't miss the poor quality of Japanese paper towels.
Posted by Orchid64 at 12:15 AM