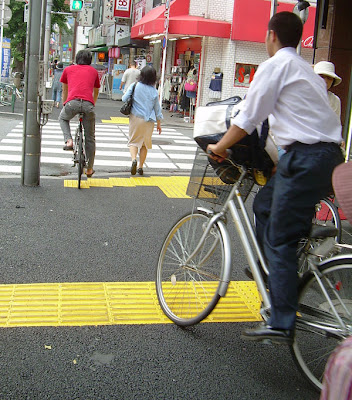 As part of the never-ending competition for space on the sidewalks, stations, and shopping areas with other pedestrians in nearly every moderately crowded area of Tokyo, there is an experience that continues to frustrate me. Frequently, people who are walking behind me will walk very fast just to get around me and the minute they get in front of me, they will slow down to a pace which is slower than mine. Cyclists also favor this "hurry up then stop or slow down" behavior, but on rarer occasions. They tend to try and cut me off at crosswalks and then stop dead because they want to be in front of me when the crossing light changes. They figure they don't want to risk being behind pedestrians who walk slower than they ride their bikes. Never mind that I just end up walking around their bike and standing next to them at the red light 99% of the time. This behavior is similar to the way cars used to pass me in America and then slow down once they got around me, except this is more frequent and annoying.

I won't miss this type of pointless and petty pedestrian behavior.
Posted by Orchid64 at 12:15 AM