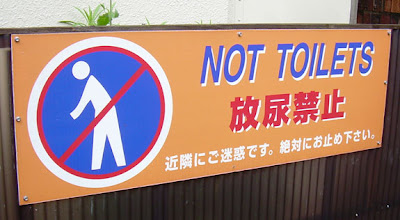 A sign in a paid parking lot asking people not to use it as a toilet
I realize men pee in the streets all around the world, especially when they are drunk and it's night-time, but I personally did not experience it that much growing up in America. I was very shocked to see that perfectly sober men in Tokyo urinate in well-traveled side streets and on other people's private property, even when access to public toilets is mere minutes away. They do it during the day time as well as at night. I was walking home from shopping at 4:30 and saw an older man putting it away and zipping up as I walked by. I'm sure the people whose wall he watered will appreciate the scented lubrication. My husband has also seen a mother "instruct" her son on how to pee in public by doing so into the areas off to the side of streets.

For a country so obsessed with cleanliness, public urination in densely-populated urban areas (including residential ones) is not only gross, but shocking, and I won't miss it.
Posted by Orchid64 at 12:15 AM