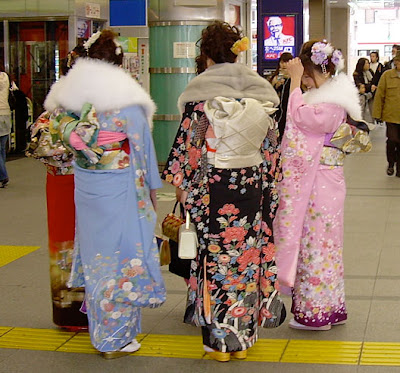 Part of my freelance work is doing English telephone testing. One of the questions I ask in order to elicit as much speaking as possible from my subjects is, "tell me about your family." In 90% of cases, if someone has a sister who is already married, they won't even mention her existence unless I specifically ask "do you have a sister?" In the other 10% of cases, they'll say, "I have a sister, but she's already married," in a manner which makes me feel that she is no longer a concern for the family (or a burden that has been dispensed with). My discomfort from this is very ethnocentric, and the omission of a married sister relates to the way in which a "family" is defined in Japan. When a person marries, they are either added to their spouses family registry or their spouse is added to theirs. It's as if their blood tie is abolished by marriage and it's generally (but not always) the case that women are added to their husband's families.

I won't miss the way sisters are regarded as if they are no longer a part of the family after they marry.
Posted by Orchid64 at 12:15 AM