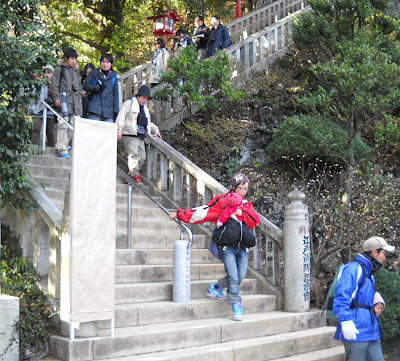 If you've ever called tech support and been asked a string of stupid questions before you can get to the heart of the issue, you'll have some idea about the point I'm about to make. In Japan, I've experienced a lot of situations in which I had to "make a show" or someone else had to take pointless steps before the real issue could be addressed. In my former company, there was always a problem with the temperature in early spring because my location (in a closet-like space with no circulation) was always hotter than the rest of the office (which was open and had multiple windows to open). I wanted to use the air conditioner, but the president kept turning it off. It wasn't until I gave up and sat in my cubicle with an anemic little fan in abject misery (which was interpreted as "gaman", but was really being fed up) for several days that I was allowed to use the air conditioner. It wasn't the need of the air conditioner or the facts of the situation that were wrong, but rather that I had to go through the steps of showing I was willing to "endure" before I would be granted the right not to suffer. Only after the president was placated could I be given relief even though it was clear he knew my case was valid.

In another case, my water heater had developed a problem where it kept shutting off every 10 seconds. The gas company came over and insisted that the problem was a lack of ventilation, even if we used the proscribed fan and had an open window. We knew this was not the case, but they wouldn't look any further until the landlord had someone come in and professionally clean the fan. Only after this pointless step was made would they open up the heater and find the real problem and fix it. Frankly, I'm sure they knew that wasn't the issue but this was a hoop they force customers through before they'll really fix things.

This sort of having to go through the motions when the real issue is known and should be addressed immediately is something I experience much more often in Japan than back home (as I never dealt with it back home), and I very much won't miss it.
Posted by Orchid64 at 12:15 AM